The journal formerly known as Woody’s Office Watch are reporting problems already, and recommending people steer clear of it for a little while.

(The Office Watch web site could do with some work. They’ve written their archives page in such a way that sometimes the lines don’t wrap, but you have to scroll across to read them; and try clicking the “Contact the webmaster” link to point it out, and you get your email program popping up composing a mail to “watchit”… very bloody useful.)

Sometimes it makes sense to embed one Microsoft Word document in another, rather than include a link to it, or paste the contents in. This is especially useful when sending multiple documents to people who can’t access your shared files. (Though only, of course, in environments where you can be sure everybody has Microsoft Word. If that’s not assured, you should be using something more universal, such as PDF.)

For some reason Word makes it quite tricky to do, its interface preferring to send you down the path of taking the contents of your second document and pasting them into the first.

Microsoft today started previewing the next version of Office. Ten bucks says it won’t make this process any easier than it is now.

Well, after much speculation, this morning (AU time) Apple announced a swag of new stuff, including:

You know what really bugs me about Windows and Office sometimes? Sometimes a process will just decided to grab all the CPU and go out to lunch for minutes at a time. I don’t know what it thinks it’s doing — re-indexing its data, re-compiling itself, contacting Mars, something like that. Whatever it is, it’s not paying much attention to what I want it to do.

Outlook just did it. I was in the middle of writing an email. Voom, out to lunch. I managed to save it and exit. And the process kept running till I killed it. WTF? And before you ask, yes, my antivirus and firewall are primed, up-to-date and running. Latest releases, latest service packs of everything. This stuff should be stable.

Annoying, that’s what I call it. 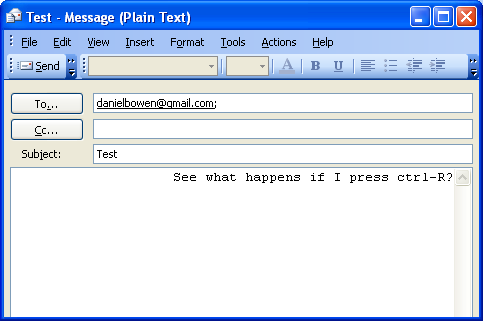 I’m sure this bug has been around for years, possibly back as far as Outlook 98: When reading an email, Ctrl-R is the shortcut for Reply. When writing it, it’s a shortcut to right justify the current paragraph. Even when you’re writing a plain text format mail which has no right justify.

If it was using the same shortcut keys as Word, you could left align it with Ctrl-L, or centre it with Ctrl-E. But neither of these seem to work. Not that it matters greatly, since being plain text, it loses the alignment during transmission.

I found a good guide to cleaning out the gunk that’s in Word’s HTML documents. For the smallest most efficient files it seems to conclude that the Textism Wordcleaner — free for files under 20Kb; for bigger files subscription options are available. This issue has been causing me some angst for some time, and one of these days I’m going to bash out a tool for this myself. (Don’t hold your breath.)

I don’t normally link to the excellent DailyWTF, because it’s full of good stuff, I’d be linking every day. But yesterday’s picture of the server room with a fishbowl to catch the airconditioner water outlet is an absolute classic. (Make sure you read the article as well as look at the picture.)

Classical music labels have criticised the BBC for offering Beethoven’s symphonies as a free download. This strikes me as a tad narrowminded. I’d imagine there’d be a number of people out there who might otherwise not be interested in classical music who might listen to these then go out looking for more to buy. (via Dave Winer)

Microsoft are now offering free evaluation sessions in their products, making use of their Virtual PC technology so you just try things out on a remote session via your browser and Citrix Java client.

New version of Firefox (1.0.5) is available, fixing some vulnerabilities.

Want a cheap (free) and cheerful web page editor for Windows? Frontpage Express doesn’t handle niceties such as CSS, but it will do basic page editing, including things the latest versions of Word and Excel make a hash of, such as tables. It also doesn’t have the nasty hooks into Frontpage servers that the old full versions of FP had.

Originally it was bundled with IE4 and 5. It’s not officially available for download anymore, but Google can find it for you.

When you open an attachment in Outlook 2003, it saves it into a temporary directory then shells the appropriate program to open it. If you then do a Save As from that program, it defaults to that directory, which appears to be something like this:

A colleague of mine “lost” a bunch of files into there. Try and browse there through Windows Explorer, and you can’t find it. In fact you can get locked out of it even from the application Save As, if you go to the parent directory. The only way to get back in is to type the path manually, or search for the OLK85 directory on the filesystem.

To further confuse things, in a completely different directory:

…are shortcuts for all those files in the OLK directory, which are back where we started:

The default temp directory is also in that general neighbourhood by the way, and deserves a cleanout every so often.

A quick look in mine for files more than a week old found 557 files taking 272Mb, as well as 38 directories with another 316Mb. Apart from a Temporary Internet Files directory in there, it all went happily to the recycle bin, and thence to Silicon Heaven.

George Skarbek’s column in The Age this week answers this question:

Q: How can I set up a music file to play through an entire PowerPoint presentation? I can get it into one slide, but it stops when the slide changes. P. Turnham

My suggested answer: You shouldn’t. Are you trying to fecking torture your audience or what? Just because you found some tinny bit of computer music that would have the original composer turning in their grave doesn’t mean anybody else wants to hear it, let alone for the duration of a complete presentation. It’s crap, dude, pure crap.

Show your slides, know your facts, talk to your audience, take questions at the end, and don’t over-do the cutesy clipart or animations. That’s how to do it.

Microsoft has announced the next version of Office will use XML by default — that is, Word, Excel and Powerpoint will use XML documents embedded in Zip files. They will also issue updates to those Office products back to the 2000 versions so they can use the new formats.

The XML will be documented, and open — to the extent that you will need to acquire a free licence from Microsoft to use it, on their terms presumably.

The terms of the licence will be interesting. You could contrast this to the MDB (Jet) format, which while it isn’t XML, and isn’t an open format, is quite well documented in its use via the various Microsoft libraries you can use to get at it (ADO/MDAC, DAO, etc). It’s interesting to note that Jet is royalty free, so you can give Jet databases to anybody if you have a Microsoft developer tool, though the one thing you can’t do is build a solution that does much the same thing as Microsoft Access. (It’s a similar story for all their other develop tools).

So the question is: will the MS licence preclude people from building, say, an alternative word processor or spreadsheet that can read and write the format? Will OpenOffice be able to use the format for interopability?

They imply no such restrictions will exist, with this to say on whether opposing products will make use of the format: Customers also know that the true value of a desktop application is not the format in which data is stored but the full breadth of capabilities offered by that application, along with the quality and security of the user experience that it provides — Steven Sinofsky, Senior VP, Office.

Obviously switching to XML opens up a number of possibilities, making it much easier for third party applications to delve into documents to read/write data, without mucking about in the Office object models (which in turn ties you to COM and Windows). You could use XSLT to convert documents into other formats, or to display on new devices or applications.

It should lead to interesting developments, and let’s hope the other Office applications follow suit.

Okay, this is from the Windows XP logon screen.

Leaving aside for a moment the fact that I have nearly 200 unread mails, I want to know three things:

After all that messy anti-trust business, surely Windows XP and Office 2003 shouldn’t be so closely coupled as to provide this information on the logon screen.

Who decided providing this on the logon screen would be a good idea? What other surprise supposedly private items might popup for all to see?

How the smeg do I turn this off, while still using the Welcome screen, and preferably leaving Fast User Switching on?

This KB article describes it in more detail. I’ll need to do a little more digging to figure out how to turn it off.

Update 12:45pm. This article describes a registry hack that effectively disables it, by removing the privilege that updates the message count.

7:30pm. Yes, that registry hack seems to work. (And thanks to Wilson, who spotted it before I spotted it).