I used Firefox when it was initially released about 15 years ago, but migrated to Chrome a few years later.

This story made me think it was worth trying FF again: NYT: ‘Firefox Is Back. It’s Time to Give It a Try.’

A couple of weeks ago, I tried Firefox over a few days. Here’s what I found.

Once-off import of everything (including passwords) is easy: Switching from Chrome to Firefox

I’m trying out Firefox now on desktop and Android. Will see how I go.

So far I haven’t found a way of continuous synching of Firefox and Chrome without plugins.

On my desktops at home (Win7) and work (Win10), Firefox feels about as fast as Chrome, except for Gmail, but I think I’m seeing the effects of the new Gmail interface, which I switched to a day before switching browsers – this seemed slower than the old interface in Chrome as well.

Bringing bookmarks, passwords, etc over from Chrome was easy. Have synced most of them via a Firefox account (but not bookmarks, as I want the bookmarks toolbar to be different between home and work – I rarely use non-toolbar bookmarks)

It seems to run fine on my Android phone. Again, was able to sync via the Firefox account. Easy to set Android to open FF by default.

Possibly a bug in FF – on my work desktop, if I maximise the browser window on one of my monitors, the navigation all disappears. It works on the other monitor, and at home. — This is not a FF bug – Chrome, IE and Edge are all doing it. Probably be a graphics driver issue.

…at some stage a Windows Update came through and seemed to fix this.

One issue I’m seeing with Firefox: looking at Youtube, the options to embed a video have disappeared. Instead, the Share option will only let you send a Youtube message to somebody with the video link.

Tried Edge/Chrome on the same video, and they’re appearing. (It’s one of my own videos, so the option to allow sharing is definitely on).

So it seems Firefox appears to be doing something funny. I wonder if it’s trying to render a simplified (mobile-like) rendering of the page, though I can’t see an option for turning that off.

Eventually I found the Embed option. The navigation to it is totally different from within Chrome and Edge, making it difficult to find.

(Responsive Design Mode is off – looks like a handy option to have, actually)

Then I started to see similar issues on carsales.com.au… hmmm.

Well, I’m going back to Chrome, because:

For those sticking to Chrome but unhappy with the privacy defaults, there are a few tweaks that can be made, though who knows how effective they really are.

(I’m finally posting this just as news comes through of the big EU fine against Google. Interesting.)

I’ve long regarded JavaScript in the browser to be one of the biggest security holes in web-browsing, and at the same time the Internet works less and less well without it. In 2008 Joel Spolsky made the observation that for some people the Internet is just broken:

Spolsky:   Does anybody really turn off JavaScript nowadays, and like successfully surf the Internets?

Atwood:   Yeah, I was going through my blog…

Spolsky:   It seems like half of all sites would be broken.

Which is not wrong.  Things have changed in the last five years, and now the Internet is even more broken if you’re not willing to do whatever random things the site you’re looking at tells you to, and whatever other random sites that site links off to tell you to, plus whatever their JavaScript in turn tells you to. This bugs me because it marginalizes the vulnerable (the visually impaired, specifically), and is also a gaping security hole.  And the performance drain!

Normally I rock with JavaScript disabling tools and part of my tin-foil-hat approach to the Internet, but I’m now seeing that the Internet is increasingly dependent on fat clients. I’ve seen blogging sites that come up empty, because they can’t lay out their content without client-side scripting and refuse to fall back gracefully.

So, I need finer granularity of control.  Part one is RequestPolicy for FireFox, similar to which (but not as fine-grained) is Cross-Domain Request Filter for Chrome.

The extensive tracking performed by Google, Facebook, Twitter et al gives me the willys. These particular organisations can be blocked by ShareMeNot, but the galling thing is that the ShareMeNot download page demands JavaScript to display a screenshot and a clickable graphical button – which could easily been implemented as an image with a href. What the hell is wrong with kids these days?

Anyway, here’s the base configuration for my browsers these days:

Thunderbird discovered that yahoo have changed their mail server’s POP3 behaviour, meaning you can’t leave mail on their server and download it locally. So it pops up the following message box:

Or you could just make people angry, that works too.

I’ve run the Google Chrome on Linux beta since it first become available, and my impression is: slow. I might be unusual, in that I typically have dozens and dozens of tabs open, and that may break Chrome’s model of shoving each page into its own process, and this PC has “only” a gig of RAM, but it’s slower than FireFox for the same task. Things were a lot worse before I loaded AdBlock and FlashBlock for Chrome. Now my CPU isn’t pegged at 100%.

Embedded JavaScript is affected by this performance hit, so that particular tools that I have help do my stuff, well, don’t anymore.

Most annoyingly, it seems, although I haven’t confirmed it, that the back button causes a page reload: it doesn’t come out of the cache. Or the slowness could make it look that way. But how long can it possibly take to render a page anyway?

On the upside, it hasn’t crashed, and I would have expected FireFox to mysteriously die without any explanation by now (a sign that Firefox is going to die soon is that tab-swaps/page loads become very slow, indicating a similar root cause which I’m guessing is memory exhaustion). Firefox has always done the mysterious death thing, and I was hoping that upgrading to 3.5 would fix things, but no dice.

I’m trying to decide whether it’s preferable to have my browser snappy, but occasionally fall in a big pile and get back up again, or a laggard that rolls with the punches. Perhaps I’ll split my browsing between them simultaneously; vital stuff on Chrome and throw-away stuff on FF, but that’s going to be a bit tough on my brain.

[UPDATE]
Well, it turns out that Chrome is a memory hog. I bought another gig of RAM, and wouldn’t you know it, the PC is flying. My suspicions were tripped when all of the RAM was in use, most of the paging file and the little orange disk activity light was slowly burning a hole in the wall on the other side of the room.

Chrome fast. FoxIt reader fast. But by default they don’t work together so well, insisting on PDFs being saved to disk before FoxIt will open them.

Here’s how to get read PDFs inside Chrome using FoxIt reader:

UPDATE: As commenters have noted, unfortunately the relevant files may be in place only if you installed the Firefox plugin with FoxIt Reader — which may not offer to do so unless it detects Firefox is installed.

Is it just me who sees Firefox continually mixing up its favicons on the Links toolbar?

Surely it can’t be that hard to keep track of them correctly?

Lifehacker has an updated set of Windows web brow

Seems Safari and Opera are the fastest, though they also note Firefox uses the least memory.

Is it just me who's having stability problems with theage.com.au? Sometimes when I'm loading pages, it crashes the browser completely. Locks it up. It happens at home, on both my PCs, in both IE7 and Firefox on XP SP2, and appears to be linked to a video player Flash applet displayed on some pages, particularly at night and weekends when they appear not to have other content such as adverts to show.

Oddly it doesn't occur at work, but it causes big problems at home. I've up

dated to the latest Flash plugin and that doesn't seem to help. I haven't found any other Flash applets that cause the issue.

I've put theage.com.au into IE's Restricted Sites list. That neatly zaps the use of plugins like Flash.

There appears to be no equivalent method in Firefox. Flashblock would do the job, but is a little like a sledgehammer to crack a nut. AdBlock Plus should do better.

Of course, none of this solves the root cause. I wonder if it's just me.

If you've upgraded to Firefox 3 and are wondering when Google will update Browser Sync to work with it, you'd better find an alternative product.

Google has decided to dump the product.

how to use dropbox for ipad

It appears that for now, Mozilla's Weave might be the best substitute (though it's in beta at present). Or Foxmarks, though apparently it doesn't play well with the Web Developer Toolbar.

The bug that I first ranted about in 2004, and which was first raised eight years ago, the cropping of tool tips from <title> tags, has finally been fixed in Firefox 3. 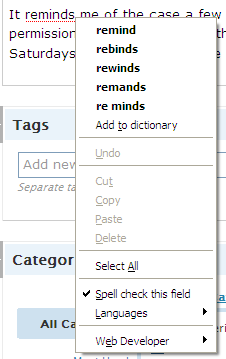 FF WTF — is the AU English dictionary written by volunteers or something? How can it be missing so many basic words? It doesn't know reminds for instance?

Is this fixed in FF3 then?

how to use ipad in classroom

zt. 10am is too early here. Apparently it's all based around US time. Blargh.

Now it's well after 11pm AEST, and it's still not there. What time does this thing kick off? Even the Pledge bit doesn't work; keeps resetting the region dropdown every time I choose something.

No matter, a post in the forums on spreadfirefox has revealed where the FF3 download is: it's here.