AppleInsider has found the icons for the new iTunes countries, thereby confirming iTunes is about to start in Australia, Switzerland, Sweden, Norway, and Denmark. Not before time for those AU-ers among us. I’m seeing more and more of those white earplugs on the train to work.

It’ll be interesting to see how it goes. So far all the Australian online music stores have concentrated on selling protected WMA files. These haven’t been setting the world alight, partly of course because the files are useless for legions of iPod owners, and from observations, there are hardly any non-iPod portable music players out there in userland. And for myself, I’d refuse to buy files that won’t live beyond the (hopefully long but inevitably limited) life of my player.

Record companies must surely be waking up to it by now. They can’t copy-protect conventional CDs properly — it either breaks the Red Book standard (and thus compatibility) or it doesn’t work. Anything they try is either useless or has been hacked. So you might as well just sell MP3s. They’re no more vulnerable than CDs. And it’s better to be selling copyable songs than no songs at all.

And the reported Apple price of A$1.80 per track is competitive. A quick scout of some WMA-selling stores showed a typical price of A$1.89 per track, with top ten hits at A$0.99.

The other thing this week for Apple fans is the OS X “Tiger” release, though I’m sure they all already know that.

I know rumours of an Australian iTunes store have been around for ages, but it looks like in the past week, Apple has registered itunes.com.au

No web site responding as yet.

At last a performer who understands the new way of the music world.

Billy Bragg has released his latest live recording exclusively as an MP3 download. For AUD$17 you purchase the 150MB zip file direct from the artist. It’s 33 MP3 files, encoded at 190kbs. The killer is that there is no DRM on the files – you can do with them what you want for as long as you want as many times as you want. I’ve got them on my PC, put them on my iPod and burnt a CD for Rae to listen to in her car. I didn’t have to go to the shops nor did I have to wait for a sliver of plastic in the mail.

When is everyone else going to understand this?

Well, I can help you.

The South by South West festival have put together a 2.6G bittorrent of 750 artists associated with the festival and itâ€™s free to all comers.

Though I notice Apple’s AU web masters appear to have just copy/pasted from their US site… the Alt text for the advert proclaims “from $99” … anybody going to try and take them up on that? 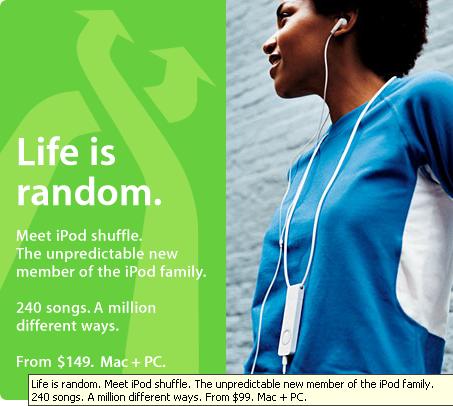 Apple is expected tomorrow to announce the introduction of an Australian iTunes music store to coincide with the start of its annual MacWorld conference in San Francisco.

Full story at The Age (free registration required) or MacDailyNews.

It’s one thing for us techno-fetishists to be praising the iPod, but quite another when those in music join in. Today’s Age EG “Sticky Carpet” column pays homage to the device.

Yes, 2004 was the year Sticky went out and bought an Apple iPod.

In flashy campaigns, the people at Apple market this revolutionary technology as a must-have fashion accessory, when they really should be saying: you no longer have to spend hours a week organising your CDs, because this little helper will do it for you without complaint.

… and reflects on its influence on the traditional track/album structure:

It’s getting further and further away from the days when albums were treated as a distinct singular entity, to be played from start to finish.

Part of the progression I suppose. Once upon a time it was track/side/album. Sides went when CDs took over tapes and vinyl. Perhaps the iPod will speed the progression to individual tracks being the new way people buy music.

A number of comments

Back for my birthday, Cathy bought me The Cat Empire CD. Which is great, I love The Cat Empire. After unwrapping the present, I read the back cover and realized it was one of the broken copy protected EMI CDs. And after much howling and frustration it went back to the shop (still in its shrinkwrap) to be swapped for a CD that complies with the Red Book standard.
Fast forward to last week, when I was at my local library. There was The Cat Empire CD! “Great, I’d Love to listen to that”, thinks I. I take it home, and in a fit of pique decide to see if I can load it onto my MP3/WMA player… and it does, using XP’s Media Player.
Isn’t copy protection meant to work? I guess that’s why I bought the LiteOn CD drive – it has a reputation for reading “difficult” disks. I can listen to the music, and haven’t paid for it, when I would have been happy to pay for it… the CIA calls that “blowback”, don’t they?