Meanwhile some sneaky people on eBay have been selling what appears at first glance to be an XBox 360, but upon closer examination is actually an email address on Hotmail/Yahoo mail. Pity the poor fools that have bid for them. (via Lex)

Okay, now why does an eBay AU listing have a “Report This Item” link, but the same auction on the US site doesn’t? Ah, turns out it’s being trialled in Australia, with the rest of the world hopefully getting it soon…ish.

That’s it, ladies and gentlemen, it’s over: the High Court has ruled that mod chips for video game consoles are legal. All six judges of the High Court held that widely used mod-chips are legal and that playing a game on a consumer’s machine does not constitute an illegal copy.

This effectively clarifies that using mods to get around regional coding is legal — something important to consumers of video games and with clear ramifications for DVDs.

Pirated games, of course, are illegal. But mod chips are a legitimate technology.

Microsoft announces a bunch of XBox 360 game collaborations and confirms XBox 360 will be compatible with (old) XBox games, though there’s some doubt over how it will be achieved, and evidently it won’t be clean: Microsoft representatives did say they would start with more popular titles such as “Halo,” then move down the line.. Yeuch, sounds messy.

Meanwhile Sony has pulled the covers off the Playstation 3, with what sound like some very impressive performance stats.

Oh, and some mob called Nintendo with a console called Revolution appears to be destined yet again for third place.

As everyone on the planet would know by now, Microsoft has revealed the design of the new version of the XBox — which they’ve called the XBox 360, which shows the marketing bods have won over the dev geeks, who I’m sure would have been happy to call it the XBox 2.0.

There’s a bunch of info on the hardware specs which make it sound suitably groovy, with the most notable thing being a move away from Intel CPUs over to the Power PC. Presumably this will give it more power for the money, which after all is MS’s money, since it’s not like Wintel machines where they just tell the manufacturers the spec — oh no, this thing they have to build themselves, so they’ll want it to be as cheap as possible.

There seems to be no official word on XBox 1 compatibility with this thing, though evidently a user survey hinted that the 360 would play the old games. They must have some pretty good brains working on getting that going, but then I suppose these days you can run PC software on Macs using Virtual PC, so software Intel emulation on a PowerPC isn’t anything new.

And the price and availability? Well they’re saying end of the year for US and Japan (and Europe???). The rest of us will have to wait for sometime next year. With the price of the console likely to be about double what an XBox costs now, it remains to be seen if the games for it will really blow people away enough to shell out for it though.

Hey I wonder if, unlike the PS2, it’ll stand up like in all the pictures without you having to buy an optional stand?

If you’re looking for maps of your favourite video games, check out the Online Video Game Atlas. There are some very large and detailed maps for download.

Be careful, though. This quote may act as a warning:

Weellllâ€¦ I just learned how big a PNG has to be before Opera rolls over and plays dead.

Hold onto your hats folks… it’s the Millenium Falcon X-Box. 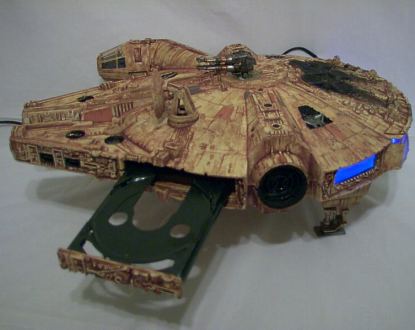 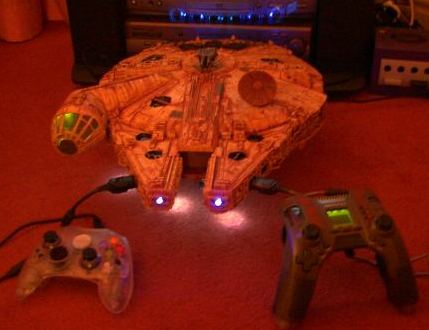 It’s not just Firefox which is released on the 9th. The Halo 2 publicity bandwagon is in full swing, with its official release on Tuesday… or for those who can’t wait a second longer than is necessary, midnight on Monday night. The “Master Chief” mascot appearances (unarmed) have been happening over the last couple of months, the Australian Halo 2 web site has a splash of local content — for browsers from Melbourne, the Covenant fly in over the Rialto towers (presumably while the Halo 2 tram passes nearby).

A number of shops will be open for sales on midnight (including the pictured one in Chapel Street, Prahran), but Myer stores in Melbourne and Sydney will be holding all-out parties, with music performances, giveaways and appearances from celebrities such as local footballers and one of Paris Hilton’s cast-offs.

It’s a reminder that the video game biz is worth big bucks. The first Halo did a lot to drive XBox sales. Halo 2 may not make the splash that, say, Shrek 2 on DVD did a few days ago, but at more than double the price per unit, and with some gamers likely to be queuing for their copies, there’s a lot of moula at stake.

Me? I’ll be snoozing. I’ve got Halo, but haven’t had time to play it properly. I’ll probably get the second game, but wait until it drops in price to at least below $50 (and I’ve got further through the first). I do enjoy my games, but I’m not hardcore, and personally I can’t quite stomach playing $80+ for a game.

Will be interesting to see if Halo 2 replaces its older brother as the XBox game with the highest rated reviews ever.