I was going to blog about this some time ago, but it slipped my mind. Better late than never.

I bought an XBox One, and some games. Then I looked for secondhand games, and bought one or two, mostly stuff you can’t buy new anymore, like Halo remastered and Star Wars – Battlefront.

The Star Wars disc turned out to be faulty. The shop would happily take it back, but didn’t have a replacement they could give me.

It turns out that, provided it can be at least partially read, you can use the disc to prove to the XBox that you own the game, then install it off the network.

It’s easy: pop the disc in, cancel out of the installation, then go to the XBox store and find the same game. It’ll give you an install option, which will download it from the servers.

Unlike a game bought online, you’ll still need the disc in the console to play the game.

Anyway, the youngest wanted one to play some Gamecube games, so we went hunting (in Melbourne). You can’t buy original Nintendo controllers retail now (might find them on ebay I suppose), but the (clone) options we found were:

As he wanted a memory card, and they appear to be pretty scarce, we ended up with the latter, which works well, though it would have been nice with a slightly longer cord.

It’s nice to know that (for the moment) you can still buy these things and play the old games. Viva la backwards compatibility.

Back before Christmas, I had pondered getting an XBox 360. Hey, it would let me play the new Pacman, and that Braid game sounds really good.

Then I discovered according to Wikipedia and Microsoft, there are a number of XBox games we have at home that can't be played on the 360.

So I’d have to keep the old XBox going to play them. That sucks.

And at least one of them is a Microsoft game.

Evidently each game needs an emulation profile. Which means I suppose that alas the XBox 360 is not sufficiently advanced as to be able to fully and properly emulate the original XBox, which is why each game needs to be made compatible individually.

We ended up getting a Wii for Christmas. Admittedly the old XBox hasn't been switched-on since.

At least Nintendo do their backward compatibility properly. Having seen how Microsoft's dealt half-heartedly with the old XBox, I wouldn't have wanted to buy into another technological dead-end.

I might see what's out there to turn it into a Media Centre instead.

Guitar Hero/Rock Band compatibility: For those looking at the options for Guitar Hero and Rock Band (insert grumble about RB2 not yet being available in Australia), check Joystiq’s instrument compatibility chart to see which instruments work with which games.

OpenID: Ooh, this I like: Jeff Atwood on how to use your own URL for your OpenID.

Back when it was announced, it sounded like Nintendo's WiiWare would let bedroom coders get their games into their Wiis, just like Microsoft XNA lets anybody write for the XBox 360.

Not so. Apparently all the usual NDAs and licence fees apply. The difference is the games can be developed by small teams (within licenced developers) and the games are distributed via Nintendo's online service.

WiiWare is a lie

I know I was never going to get around to coding any more games, not with my current workload, but all the same, I liked the idea, and it was helping leaning me towards buying a Wii.

Microsoft has dropped the price of XBox 360 in Australia, to $349 for the base-level Arcade (note, it doesn't run old XBox games because it has no hard drive, and won't provide HD video), $499 for the Pro (what should be called the standard model), and $649 for the XBox 360 Elite.

how do you use kindle on ipadoxworld.com.au/news/new-australian-pricing-revealed-for-xbox-360.htm”>XBoxWorld reports the Arcade can be got from BigW for just $278 at the moment.

Hmmm. $278 to play Pacman Championship Edition. Am I enough of a sucker to buy it?

Very cool. MIT are using sixteen Playstation 3s rackmounted and setup as a cluster to do supercomputing. 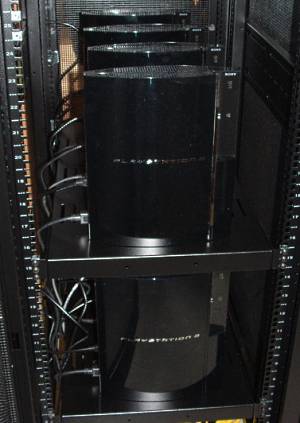 If you’re like me, and clinging to your “classic” XBox while you ponder upgrading to your next console, now’s a good time to go out game shopping. Arm yourself with a copy of Metacritic’s index of XBox games (if you copy it into Excel and only print the half-decent games, say those rated above 70, you can probably get it down to a fairly small and inconspicuous size) and hit the shops.

Or if you just paid $30 for Harry Potter: Goblet Of Fire for the kids a few weeks ago at EB (and it was secondhand), seethe with rage as you spot it for just $20. (Grumble)

It’s amazing to see how quickly (original) Xbox games have disappeared. There’s still some on the shelves, but their space has shrunk markedly to make space for other platforms, and there’s nothing in most advertising — it’s all gone onto the Xbox 360.

Contrast that to the Playstation, where PS2 games are still being promoted along their PS3 companions, and even the newer games are still being developed and released for the PS2. Which reflects the massive install-base of the PS2 against the Xbox, I suppose. In fact, you can still buy a PS2 in the shops.

I have an old Xbox… I’m not ready to upgrade yet. Perhaps it’s due to the fact that I rarely have time for it, but I’m still enjoying PGR2 and Halo. Will I still be able to find games on the shelves in six months’ time? Probably. Twelve months? Who knows. You can still buy GBA games new.

When I bought my Xbox a few years ago, I pondered that buying it was actually a good way to fight back against the dominance of Microsoft, because they lose so much money on them. Turns out Microsoft reckoned they lost US$4 billion on the venture.

Sony’s PS3 will be available from March 23rd in PAL territories such as Australia and Europe. The Age reports it’ll retail for A$999 in Australia, and it’ll be the 60Gb hard drive version — the cheaper version won’t be sold. The BBC notes Europeans will also get the more expensive model.

Now, how many people are umming and erring because they want a PS3, but are still officially boycotting Sony because of the rootkit debacle?

Curmudgeon Gamer shows a History of Console Prices, trying to show that in inflation adjusted terms, PS3 isn’t going to be so expensive.

But the price comparison between it and the XBox360, wow. And the XBox ain’t cheap either. I can buy a PC for that kind of money.