Admittedly I’ve only been using it for a short time, but here are my initial thoughts about Office 2007.

I’ve ranted before about applications which decide to implement their own standards for colours. iTunes is the classic example. In order to make it look all cool and hip and skivvy-wearing-Apple-like, it has subtle shades of grey on the title bar to indicate (ha!) whether it’s active or inactive.

So I’ve been playing around with Office 2007, and now I find they’ve done the same damn thing.

And here it is when it’s inactive.

Actually, no, wait, I might have got those mixed up. Which is precisely my point.

WinXP’s default colour scheme gives me nice bold title bars, which clearly prompt me as to what’s got focus, and what hasn’t. Office 2007 overrides this, ignoring any preferences I might have set in Windows.

Digging around the Office 2007 help, and sure enough there is a way to change it. Well, almost. Well, not quite. Actually no, there isn’t. All they give you is the option of three different colour schemes: Blue (default, pictured above), silver (which is so close to blue it might as well be the same) and black.

Black, as it happens, gives the most contrast between active and inactive title bars. But it’s not only ugly, it also totally grates against every other window under the XP colour scheme. Do I have to change my XP colour scheme to be equally ugly just so I don’t have clashing window colours? The only benefit is it appears to almost match Media Player 11.

I know MS wanted to break the mould with Office 2007, to radically change the user interface. And I kinda like the big goofy buttons. But this bloody title bar thing is very, VERY irritating.

You’ve only got a few hours left to get that cheap Microsoft Office 2007 for A$75… all you need is a student at an Australian university.

On the other hand, employees of companies that are in Microsoft’s Home Use Program can get it any time, for around A$40. Worth checking with your local IT people.

So, hands-up who is using a version of Office pre-2007 (or OpenOffice or an alternative) and has received a new format Office Open XML document (eg docx) from anybody?

I haven’t (I primarily use Office 2003). Subsequently (like most people I’m guessing) I haven’t gone and installed the updates to be able to read/write the formats. (Or have they arrived on my machine and I haven’t even noticed?)

Novell has released an OpenOffice translator for the format, which hopefully will help the documents (when they eventually start getting used by Real People) be spread around between software suites.

Some are naturally suspicious of Microsoft, suggesting Office Open XML is just another way of fighting back against the OpenDocument formats. But I don’t think one could deny that MS Office was due for an overhaul in its formats; the older ones are a bloated (in more ways than one), proprietary mess. 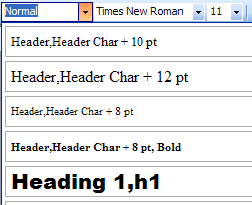 How is it that otherwise competent people still don’t know how to use style sheets in Word? How long’s Word had styles? Well over a decade.

You load up some document to do some work on it, and some idiot has created a zillion different styles, by virtue of editing the entire document manually (and therefore inconsistently) and Word happily making every little variation a separate style.

Half the headings have numbering, half don’t, the default paragraph type after a heading has a bullet, the bullets are mis-aligned, some bright spark has decided a standard text paragraph isn’t “Normal” but has its own special name, and the whole thing’s a mess.

I remember a few years ago I painstakingly set up a document with about 15 styles, to cover any eventuality expected, then wrote tons of text for it, and passed it to someone else for review. It came back with all the styles removed. All the text was just formatted independently, and had been changed around to be inconsistent. To this day I don’t know how he did that. Grrr.

And even last week a document came my way that had a ludicrous number of styles in it. Possibly 200 or more. You had to scroll through the list for ages to find what you wanted.

Oh, some people can’t use the Language features, either. I know it’s common for Aussies to accidentally set their documents to US English and then wonder why it complains about “colour”, but the other day someone sent me a document which had half its text set to French (even though it was in English).

There’s a Zero-Day attack targeting MS-Word. This is the work-around:

Don’t open Word files, not even in the Word viewer.

Office 2007 has also been completed, and the compatibility pack is now available to allow earlier versions (back to 2000) to read the new file formats.

Though as Office Watch points out, while the Word one works well in both directions, it appears that the Excel and Powerpoint don’t have full conversion, just viewers.

Using Outlook, but your signatures are going a bit funny? Turns out it keeps multiple copies of them, in RTF, HTML and TXT format, and sometimes they get out of sync. They’re in Documents and Settings\Username\Application Data\Microsoft\Signatures — if you check what’s there and delete any old ones, you should be okay after that. (Thanks Dave)

Let me make this clear: When I paste, I want the text to match the document it’s going into. This is why I’d prefer Paste Special / Plain Text to be the default.

So why does Paste Special / Plain Text keep disappearing out of my corporate copy of Outlook 2003? If I’m stuck with rich formatted emails, I damn well want whatever I paste into them to match the text.

But every app wants to bring its own format across. Even Visual Studio for heaven’s sake. I end up having to paste it into Notepad, then copy/paste to the destination.

There are a couple of ways of making plain text pasting the default: you can define a macro in Word or here’s a crankily-named Outlook macro. If you’re aiming to get it everywhere, it looks like you’ll require a program: either Cliptext or PureText would appear to do it (in slightly different ways). Not bad, but looks very simple compared to Excel. This could be a good or a bad thing. Does a lot of Excel-like things. This kind of comparison is inevitable, as most users are familiar with it.

Doesn’t feel as refined as Writely. Right-click not harnessed.

Linked to your Gmail/Google logon, of course.

Watch out if you lose your connection: My immediate reaction is this could be useful for some things — like Writely, if you want to be able to edit from anywhere connected, and/or share the document realtime with others.

But like Scoble, I can’t see it replacing “offline” apps for individual users just yet. Hosted apps within a corporation however, that could (eventually) be another matter, especially as the technology matures.

See also: Josh and I look at Writely.

It’s widely reported that Google will be releasing an online spreadsheet on the 6/6/2006 (presumably US time).

Probably limited signup initially, but keep an eye on spreadsheet.google.com, which is currently showing a 404 (rather than a “Host not found”).

Update 22:00. Now at spreadsheet.google.com I get “Server Error. The server encountered a temporary error and could not complete your request. Please try again in 30 seconds.”

If you’re looking for an easy way around “Outlookâ€™s dumbarse ‘protecting you from shadows’ attachment filter” download and install this handy attachment options extension for Outlook. It allows you to specify which level 1 attachments to let through; very handy if you have someone mailing you Access databases.