I really like Seesmic for Android, except for this: sometimes when there’s a short period of a poor mobile reception, it gets jammed, despite the signal subsequently improving.

In this case, after going through a poor signal area on my train commute home, I was back in the land of strong 3G and even wifi at home, but still it was stuck, trying to update.

The only way to deal with it appears to be a Forced close then a restart.

Surely it could be tweaked to handle bad connections better?

This seems to happen constantly; it’s out by one. It says UserX and Y others, and shows Y+2 avatars, rather than Y+1. 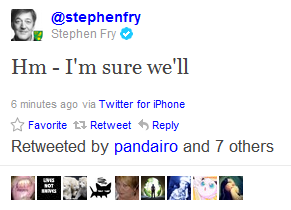 OK, they do say it won’t be inaccessible for the full maintenance window, but still, isn’t it time Twitter got enough redundancy that it didn’t need to do this?

If after tr.im’s near shutdown you came over to bit.ly, happy they’d had funding and had Twitter’s approval and seemed rock-solid and had 100% uptime, think again. OK, it’s not a full outage or anything, but if people are relying on this thing for Twitter and other uses, and maybe this isn’t the worst thing in the world… but there are going to be times when you can’t wait two hours to generate a short URL — you need it NOW!

Is the answer really to host one of these things yourself?

How about a “Remember Me” option that actually bloody works?

OK, so I can understand what’s happening: it looks like if you try to logon from a different PC/phone/whatever it figures the IP address has changed and wants you log on again. But WHY? If other high-profile online services like Gmail can keep you logged in from multiple places, why not Twitter?

Or at the very least, if the web interface is going to insist on making me log back on constantly, at least give me direct access to the smegging fields I need to do it, rather than giving me the new user page, and making me find and click on a Sign In link that’s a quarter the size of the Sign Up Now button. After some problems in the last week or two tracking stats (often they’d show zero hits), URL shortening service tr.im shut down suddenly this morning around 8am AEST, citing lack of investment:

tr.im is now in the process of discontinuing service, effective immediately.
Statistics can no longer be considered reliable, or reliably available going forward.
However, all tr.im links will continue to redirect, and will do so until at least December 31, 2009.
Your tweets with tr.im URLs in them will not be affected.
We regret that it came to this, but all of our efforts to avoid it failed.
No business we approached wanted to purchase tr.im for even a minor amount.
There is no way for us to monetize URL shortening — users won’t pay for it — and we just can’t justify further development since Twitter has all but annointed bit.ly the market winner.
There is simply no point for us to continue operating tr.im, and pay for its upkeep.
We apologize for the disruption and inconvenience this may cause you.

Personally I liked tr.im, but with its demise the quest for the ultimate URL-shortening service continues. Search Engine Land has a good list from April.

I’ve signed-up for bit.ly, and it looks okay, though already I can see one annoyance: it tracks everything by US time, with no apparent options to change that.

And I guess I’ve got about 4 months to manually go through the best of my Tweets and save the expanded tr.im URLs — something I started doing last week to prevent any future problems with stuff I’d written being lost.

Interestingly at least one of my older URLs from tinyurl.com (which has a very good record, having been around for 7 years) looks to have been corrupted: http://tinyurl.com/34sov somehow points to http://51744jqgt36.jqgt36/JQGT36 instead of http://dilbertblog.typepad.com/the_dilbert_blog/2007/10/so-you-think-yo.html Odd.

Another example: http://tinyurl.com/263hx would have linked to some media article I think; now it goes to a Polish photo web site.

Update Wednesday: tr.im is back… for now.