I got so sick of my stupid Dopod 838Pro being incapable of operating like a phone that I decided to have a trial separation. I borrowed a colleague’s mobile phone and thought I’d have a go at using a separate phone and PDA for a while.

I was amazed at how hard it was to do common tasks with the mobile. For example starting a text message required 5 button presses on the phone compared to 2 on my device. Then entering the message is so much simpler on the Dopod’s Qwerty keyboard. Admittedly I’m out of practice with numberpad texting. Having a large touch screen is a huge advantage for a user interface.

So now I’m stuck with trying to figure out how to make the Dopod behave better as a phone. I’ve uninstalled lots of apps that probably suck a fair bit of cpu. Hopefully that’ll help.

I’m not very good at keeping a lot of information in my head at the one time. I have found that I need to record appointments and tasks to make sure I remember them.

So I used to record information in a paper diary. I never had much to record, so I used an A5, week to a page view diary that included a contact section for people’s phone numbers and addresses. However, the problem was that repeating appointments and people’s contact information that carry on from year to year had to be rewritten into a new diary each year.

So I bought a Palm Vx. This worked quite well because it would sync with my computer and display all the information I needed.

Then along came smart phones. I thought this was fantastic because I wouldn’t need to carry a mobile phone as well. Plus I only need to keep phone numbers in one place. Perfect! Right? Rather than having a Phone, diary, music player and GPS unit, you only need one device.

I’ve now owned three devices (O2 Xda II Mini, i-mate JasJar and Dopod 383Pro). They’re all great devices except that they are no good as phones! With my current device, I’d say 50% of the time when I hit the “Answer call” button the call is not actually answered, it just goes off to messagebank. A friend who had a Palm Treo used to answer a call and have to wait for 2.5 seconds until the caller could hear him. The JasJar would take so long to draw the screen when you opened it that you’d invariably miss the call.

All of the devices I’ve had will play music, but the interfaces are frustrating and the sound just isn’t good enough.

It’s so frustrating. I’ve bought a stand along MP3 player (a creative Zen that I’m very happy with). I’m nearly at the point where I’m going to give up and just get a standard mobile phone. Can I diverge any more??

The idea of convergence is just fantastic. However, the reality is dragging a long way behind. 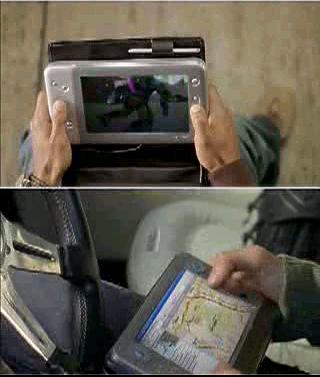 Actually looks more like a sub-tablet, PSP-type device to me.

I recently purchased an O2 Xda II Mini. For my thoughts, see my blog

At last, one of my longest standing tech dreams has been realised. I can finally sync my phone with Outlook. I know you’ve been able to do this for years but up until today I’ve never had the means to. Two weeks ago I got a great new Nokia 6230 so I purchased a connector cable off Ebay which arrived today. I could have used Bluetooth for my connection but this chews through battery life (more of which shortly) and a cable was cheaper than an IR usb adaptor. Now I have all my contacts and calendar information for the next 12 months wherever I go.

“But surely you had all this in your Ipaq?” I hear you ask. I did, but in an effor to simplify my life and reduce the bulge in my left pocket I am increasingly leaving it home in favour of my Hipster PDA. Another reason for relying less on the iPaq is the Pocket PC version of Microsoft Money never really synched with my desktop version and tracking finances on the go was one of the major reasons I wanted a PDA. Now I simply keep my receipts in my wallet until I get home.

While I love my new phone, I’ve even set it up so I can email photos from it direct to Flickr (see my test shot), I am not impressed with the battery. It advertises 300 hours of standby – I get 48. I’ve tried to get it replaced but am having nightmare time as Optus and Nokia shuffle responsibility. All I want is a new battery and they will never hear from me again.