I recently had reason to restart an old virtual machine on VirtualBox running on my Ubuntu machine, and was presented with the error:

I figured that somehow the backup had been hosed, as it had been through a couple of restores and system migrations. A ls of the above failed with

And then it occured to me that I was running under a different username now. As such:

solved the problem with the computer is completely fooled into believing that net2 is still a user on this machine. Well, for the purposes of VirtualBox anyway.

Ars Technica reports that multicore processors and virtualisation will see the (physical) server market shrink. (Not actually a reduction in the number of servers, mind you, but a slowing of growth from 61% over 3 years to 39%).

Turns out this could be good for the planet. As Treehugger says, virtualisation is a good way to green your servers by not over-providing for occasional peak processing loads. Makes sense, especially if the stats are right: that most servers only run at a load of 5-12%, but burn hundreds of dollars worth of power every month.

Hmm, a calendar of Australian IT women, in the name of encouraging more women into the industry. Available online at itgoddess.info.

If you’re more at home with mucking about on Virtual Machines, then you might be interested to know that Virtual PC is now free.

Billy Bragg has applauded MySpace for backing down on their T+Cs imposed on artists who used the site to distribute music. “I am very pleased to see that MySpace have changed their terms of agreement from a declaration of their rights into a declaration of our rights as artists, making it clear that, as creators, we retain ownership of our material.”

A couple of weeks ago Josh posted about virtualising your overloaded, slow, not-rebuilt-for-years PC, and keeping it on standby within a new build in case you need anything on it.

How about the idea of keeping that new build clean — putting on only your most frequently used, essential applications, with everything else going onto a virtual PC?

For me, that would mean Office, Firefox, my usual web-building stuff (Photopaint, UltraEdit, Filezilla), Nero, and one or two others, such as perhaps Trillian. I’d draw a line under them, and anything else not worthy of a permanent spot in my Windows setup would be virtualised, possibly in various separate virtual PCs, setup for different roles: one for Visual Studio, one for trying out freebie apps from mags, a Linux setup for LAMP development, one for stupid software that insists on running as Administrator, etc, etc. 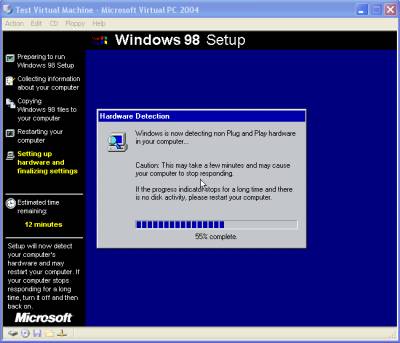 What to use for the virtual machines? There’s a few different options.

The freebie Virtual Server will only support Windows NT 4 and above, and only server OS’s, which to my mind would unnecessarily weigh down your virtual machines with more than they need. (Linux as a guest OS seems to be coming.)

Another option is the free VMWare Server, which will host a wider range of guest OSs.

The non-free Virtual PC will host just about any x86 operating system. If you don’t want to try the 45 day free trial, it’ll set you back A$215 or so, or it’s available via MSDN Universal.

A problem would be performance, of course. It’s not like emulating a 2Mhz 6502 under BeebEm. But then, hopefully it’s not as bad as what I’ve seen on my brother-in-law’s PowerPC Mac trying to run x86 AutoCad in Windows 2000.

Nonetheless games and other performance-intensive apps may not perform well under virtualisation, especially if they require particular hardware. And yet they would benefit the most, as they often have installers that wreak havoc on Windows setups, chucking weird-arse DLLs everywhere. As the “Virtual PC Guy” is fond of telling us, a lot of the older games run okay, but newer ones might be a problem.

Maybe the only solution there is to put them on a completely separate computer, or move up to Intel’s latest chips which have better support for virtualisation.

Or give the whole thing up and resign yourself to a slow computer with rebuilds every year or two.

I think I’ll try Win98 with a couple of recent-ish games (say, Midtown Madness 1 and 2) and see how it goes.

As one commenter said: Wow – this is GREAT! Now I can combine the overpriced hardware with the inferior software!

As Ed Bott points out running Windows through virtualisation would be even better. MS’s Virtual PC doesn’t currently run on Intel Macs, but evidently they’re working on it.

Now Microsoft have proven they can copy that idea as well as anybody: MS Virtual Server 2005 R2 is now free.

What if Microsoft was marketing the iPod? (Article about the origins of the video here.)

In case you’ve been living in a virtual cave, VMWare’s basic VMServer product is now free.

Google is beta trialling GMail from your own domain, primarily aimed at organisations to start with. (via Patrick)

Found an old quote of mine:
To me, reading Perl is a little like trying to understand Norwegian. A minority of things – essentials like “Help!” or “Hello” – I can probably understand. The rest is just gobbledygook. (Quoted here, originally posted here.)