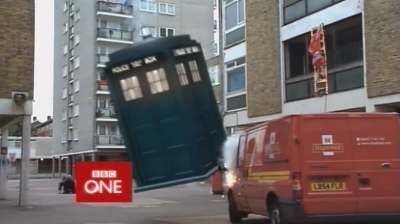 A new trailer for Doctor Who, so time to switch my screensaver to playing videos again.

The old Windows XP Video Screensaver (once a semi-official MS Powertoy), in my humble opinion was always a bit dodgy (some of the options never worked, for instance, and it would stop working if you upgraded Windows Media Player 9 to version 10).

A catch though: the video I wanted to play was MPEG2, and both the old and new screensavers choked on it on one machine, even though MediaPlayer would happily play it. The whole machine would turn to mush.

Plan B was to try and convert the MPEG2 to WMV, by simply loading it into Windows Movie Maker. Oddly, WMM wouldn’t read it.

I noticed a process called igfxext.exe ended up grabbing way too much CPU than is sensible. The errant EXE is associated with Intel graphics adapters, and evidently under some circumstances decides to go ape when MPEG2s come along.

Through this page I found that PowerDVD (which evidently does some of the work playing MPEG2s) needed patching.

This done, and things started to behave. Almost. It wouldn’t crash, but performance was crap. Probably the onboard video not cutting it.

I tried Windows Movie Maker again. This time it worked. Converted it to WMV, plays okay now, and while the quality isn’t as good (what is the deal with Movie Maker and its restrictive output options, anyway?!), it hardly matters that much for a screensaver.

(The other machine has a decent video card, and plays the MPEG2 okay.)