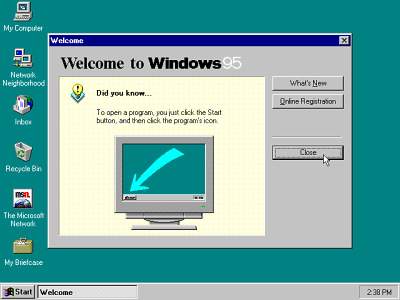 Happy birthday, Windows 95 — ten years old today. (Thanks to Malcolm for the reminder)

Looking back, Windows 95 was a big step forward for the Windows world, marking the first modern version, and certainly the first that is still usable today. Windows then trailed MacOS by a long way, and it felt with Win95 that the big gap was made much smaller.

It also seemed to be the first time that an OS got attention from the mainstream consumer, with a humungous advertising campaign. From memory (and rumour) the discussion between Microsoft and the Rolling Stones went something like this:

MS: Can we use “Start me up” for our campaign?

Under the hood it finally rid us of problems with very limited resources, and it killed the 3rd party TCPIP stack market dead, by including it out of the box. (Despite claims later from Bill Gates during the anti-trust trial that Internet Explorer was integral to Windows, it didn’t include IE unless you bought the separate MS Plus pack.)

It was slow, it was buggy, it trailed Apple by five years, it crashed after 49.7 days of uptime. But it was a great leap forwards.

PS. Thanks to an open-source x86 emulator, Win95 can now run on a Playstation Portable.