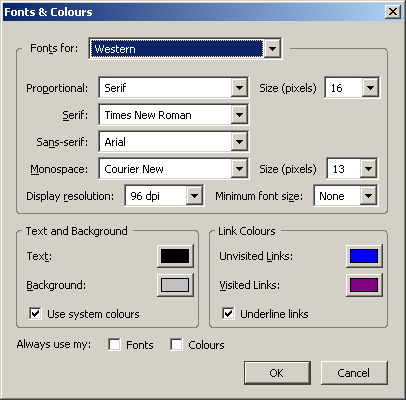 Having installed the UK-spelling version of Firefox, it almost looks unnatural to see dialog(ue) boxes about “colours”. And I think it’s the downloads dialog that refers to saving to “disc”.

It’s a consequence of most IT-related innovation coming out of the USA that we’ve become used to US spelling dominating the world of computers. From Windows 95’s “Network Neighborhood” (yes, even when installing Windows with supposedly Australian English) to “floppy disks”, “dialog boxes” and of course IE’s “favorites”… You just learn to live with words spelt (spelled) just a little differently.

Admittedly it starts to get a little grating when spellcheckers claim “English” is the same as “US English” and otherwise usable applications keep showing the dates the wrong way around, or insist on two character states and five digit postcodes. Not to mention web sites that have a country dropdown list and put USA at the top (rather than, say, putting it in alphabetical order and defaulting to it).

And don’t get me started on programs that default to Letter sized paper instead of A4.

Anyway, one catch with having dispensed with Firefox’s US spelling is ending up on Google UK when searching. Fortunately the “Add Engines” feature of the search box is pretty easy to use. Search for your preferred engine eg Google Australia for me, and click to install it. Easy.

Removing the old Google UK option may be a little trickier, but it doesn’t much matter, since once you use the AU one, it sticks as the default.