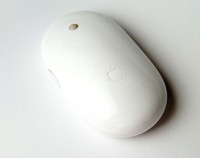 We’ve got an iMac in the PTUA office which I use on the odd occasion. I’ve gradually got used to the world of MacOS, but one thing I still hate is the Mighty Mouse.

There’s something about the feel of it — the non-buttons, and the scroll wheel in particular. I hate the feel of it. It feels really uncomfortable in my right hand; it leaves my fingers tingling in a most unpleasant way. And it’s not much better in my left hand either.

I don’t recall having this kind of reaction with any other mouse. And I don’t even understand why this one feels so bad to me.

It’s odd. Anybody else had the same sensation?

It had to happen, right? Mac OS Snow Leopard is out today. It’s the first version which doesn’t run on PowerPC Macs.

“Snow Leopard is an upgrade for Leopard users and requires a Mac with an Intel processor.” — Apple Store

I suppose it’s been about three years since Apple stopped selling PowerPCs. I wonder how many 3rd party software vendors are also abandoning them. I know my sister has a PowerPC Mac laptop from circa 2004, but I wonder how many others are still out there in regular use. Perhaps the more significant issue will be how long patches for newly discovered vulnerabilities will be supplied.

Perhaps it’s no biggie, but I’m just imagining the fuss that would be made if Microsoft made a new operating system that didn’t work with four-year-old PCs.