The cool thing about starting a new company, or having a child, or even a new project, is that you get to name it.

I fell onto Wikipedia’s list of laws, and found Diana Goodman’s Law, which says that in online discussions between women, eventually someone is accused of not having kids. Goodman is truly horrified by some of the names handed out to kids.

Unlike children’s names, with company names pretty much doesn’t matter what you call them. I’ve got one friend who named his company after a psychedelic drug, another who chose his hobby for a basis and a third after a Futurama character. Others pick some lame set of initials and add ‘consultants’ or whatever on the end. Myself, I went for truth-in-advertising: Intellectual Mercenaries. I was toying around Fictitious Deduction for a while, but rejected it as being a little dangerous in the accounts receivable department.

You’re not going to see truth-in-advertising in Project naming, no project Keeping Up With The Competition, or Dragging This Pile of Bones Kicking and Screaming into The 1990s. Acronyms seem to be very popular, even if a lot of the time the acronym becomes rather forced. Microsoft and Chip companies seem to like US Cities, perhaps because it doesn’t give anything away.

Project naming needs some flair. I suggest Pokemon Characters. I was going to suggest another Japanese franchise, but realised someone’s already gone down that path (sometimes my brain can’t keep up with my imagination).

What memorable namings have you seen (in any of the above categories)? 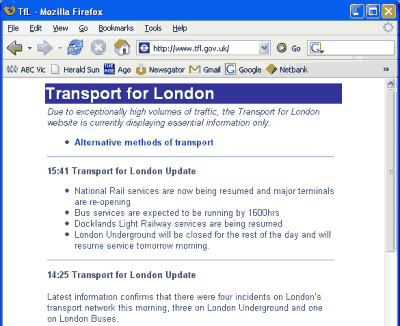 The terrible events in London overnight do have some relevance to us as humble IT workers. While there are many critical jobs performed in such situations by the emergency services, communications and other systems are also important.

Obviously top of the pile in this respect are the systems dealing with the emergency services themselves: their communications and despatch systems — and we know that mobile phone networks were affected by the chaos. A few notches down, but growing more significant, are the web sites (and background systems that feed them) to inform the public.

While the BBC News web site seemed to generally cope as events unfolded (I’m sure they’re well-versed at this kind of incident), their live video and audio streams were swamped. Likewise CNN responded okay, though ITN was sluggish. The Transport For London site didn’t respond for some time, before they switched to a plainer, less server-intensive basic information page.

Last week Connex in Melbourne suffered a shutdown, and similarly, their web site didn’t cope. While most disruptions are also communicated to SMS subscribers, the shutdown itself was caused by problems with the same systems used for sending out the alerts. Melbourne’s public transport umbrella site Metlink was responding, but the problem there was a lack of updates.

As the web becomes more pervasive, and media outlets also use it to gather information, capacity planning for peak demand becomes important. Obviously no organisation wants to spend up big on servers that never get used, but for mass communication of detailed information, the web is cheaper than employing operators or even installing masses of phone lines, and will play an increasing role in keeping the general public informed of events.