I was in contact with Stan (streaming TV) support over the weekend. The iPad wouldn’t play, whether connected via an HDMI cable or the Chromecast. It would play zero to a few frames, then freeze up.

Stan is once again stuck, on HDMI or Chromecast. Presto/Netflix work fine. About to contact @StanAustralia support. pic.twitter.com/flM6htrfMl

They suggested doing a factory reset on the Chromecast and removing and re-installing the Stan app.

It sounded unlikely (it’s the real-life version of the IT Crowd’s “Have you tried turning it off then on again”), but to my surprise, it actually worked.

HDMI was still a problem though. They said it wasn’t supported.

So why doesn’t Stan support HDMI? An interesting answer came back:

“We are unlikely to support this method of streaming in the future due to DRM (Digital Rights Management) contractual agreements we have with the studios we licence our content off of. If anything changes, we will be sure to let you know.”

This is puzzling, given their main competitors Netflix and Presto seem to support it.

It’s worth noting that Stan (and I believe the others) don’t support my 2011-model Samsung smart TV either. Thank goodness for the Chromecast. It’s not as easy as being able to play directly just on the TV (with no other devices required), but at least it works — and navigating menus is far easier on a tablet than a TV remote control.

As one observer (I forget who) noted — there’s little point paying extra for a smart TV (over a dumb one) when an A$49 device like a Chromecast is less likely to become obsolete — or if it does, it can be cheaply and easily replaced.

So you don’t want to splash out on a new iWatch or iPhone, but you do want that new U2 album that’s free on iTunes until 14th October?

The instructions (for Mac or PC itunes) say:

On your Mac or PC, open iTunes, then select the Albums tab. Select Songs of Innocence. Select a track to listen or click the iCloud icon to download.

What they don’t tell you is what to do if it’s not showing there. In my case, it wasn’t. It also wasn’t in Purchased, and although I could see it in the iTunes Store (and play previews), the iCloud icon wasn’t appearing. 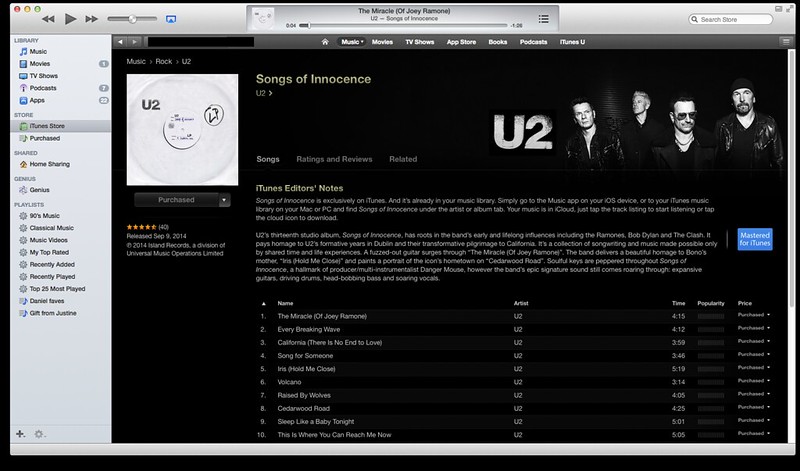 The answer is you need to switch on the option to see iCloud purchases:

Then it should appear in the Albums tab.

Update 2014-09-16: For those who aren’t as keen on U2, Apple has now published an article on how to remove the album from your iTunes: