My Google Nexus 5 finally received the Android 5 update… well, the notification for it at least.

Eventually I decided to upgrade it.

It seems pretty speedy on the Nexus 5.

Some good, useful functionality, like priority contacts (who it looks like can be set to ring when nobody else does — something I’ve used an app called Auto Ring for in the past, which still seems to work). Beware though, “Priority” apparently means low battery alerts are allowed to make sounds. Didn’t appreciate being woken up by that.

Better links from contacts to recent activity such as calls and texts.

Torch. Wasn’t there before.

Google Fit… it turns out this is compatible with Android 4. I hadn’t seen it, but it added itself with the upgrade. Quite neat, I’ve been tracking my steps. 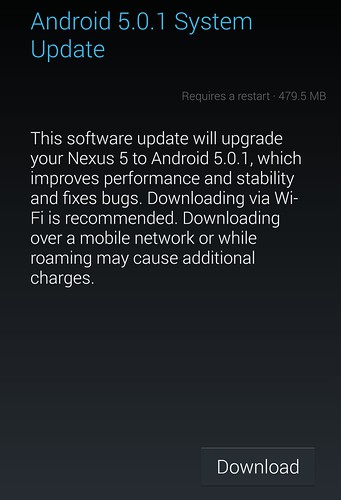 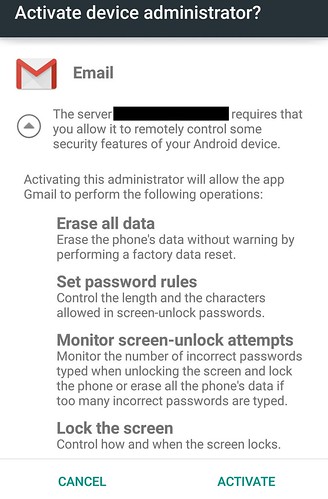 The new look may take some getting used to. I don’t understand why they’ve got rid of most of the lines between things. The keyboard is now one big lump, with no distinguishing lines between the virtual keys.

Gmail now handles the stuff that used to go through the email app, such as Exchange ActiveSync. I find that a bit painful, as I liked to keep my work/Exchange email separate from my Gmail.

Worse, it now enforces Exchange’s device restrictions (did Android 4 do this? I don’t recall that it did). This includes scary things like the ability to wipe your device if you get your password wrong too many times. Given how apps sometimes go crazy polling the server when the password changes, I’m not sure I trust it with this power.

I ended up deleting the Exchange account from Gmail. It wasn’t easy — you can’t simply remove the account. It turned out the way to do it was via Settings / Security / Device Administrators. Turning that back off forces the accounts relying on it to be removed.

I might need to find a new Exchange app. Touchdown looks good — They do a good job of hiding much it costs (appears to be US$20 after a month’s trial), but it looks like a good Exchange app that limits security restrictions to itself, not the whole phone. CloudMagic also appears to work okay, but has a completely free option, as well a paid (US$4.99/month) option.

More as I explore the new version.

I’m really liking Google Fit. Sure, it doesn’t track very much information, but I gather the Nexus 5 has a pedometer built in, so it’s nice to be able to see some results from it. 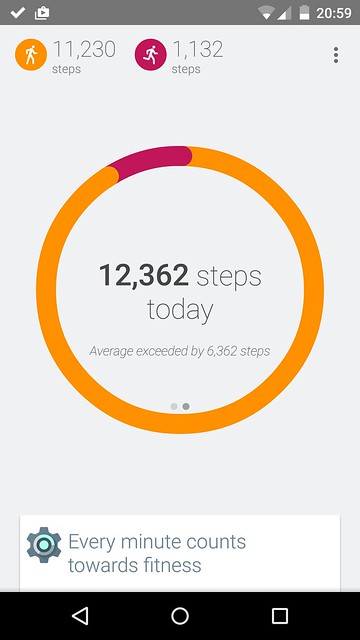 Response times seem to be a little bit slower, going onto the home screen, but nothing worth worrying about (yet).

Screenshot of the error message

So this is the error message I get when plugging my Samsung Galaxy S2 into the USB port on my Linux boxen, all running Linux Mint Maya running the MATE desktop (Ubuntu 12.04). The answer is, of course, you need to enable PTP transfers, rather than MTP transfers.  MTP transfers work great for Windows or Mac, but not Linux.  On your phone, drag down the Notifications screen, then under “Ongoing” you’ll find something about “other USB options”.  Select that and you can pick the PTP transfer.

Per the notes on how to take a screenshot on a different phone, I took a screenshot of the final screen. Getting the screenshot onto my computer, that was a whole world of hurt.  Settings | More Settings | USB utilities | USB mass storage needs to be turned on, otherwise the file browsing from Linux shows only the directory structure, no files whatsoever. Got a new phone. HTC Desire S. Nice. Will blog here as I discover how it works.

Played around with it as it charged while plugged into the mains. Thought I’d got the PIN wrong when I initially started it, and it only gives you three goes. First try: PIN from the SIM didn’t work. Second try a PIN from the account which I thought I could remember (but never can… you never do, so who uses it?) On a hunch the final try I tried the SIM PIN again, and got it right. Obviously I’d mistyped it. Annoying only three goes though.

Startup sequence guided me through setting up the phone. Pretty good. Happily said it would connect via Bluetooth to the old phone and copy contacts, calendar and SMSs across. Gave specific instructions for what to do on the other end (Nokia N95). Neato.

Figured out there was a wifi network, and asked for details. It appears to use that where possible, or mobile if not available.

HTC don’t appear to publish the SAR ratings on the web, but they are clearly marked on a sticker inside the box: 0.445 (head) 0.542 (body). This is reasonably low — I’m surprised they don’t shout about it more. I had wanted a phone with a low rating… the only place I saw it listed was on a Norwegian mobile dealer’s web site (which was found thanks to Chelsworthgale on Twitter — note their table of various brands… some of the Sonys are very high).

I think I’ve figured out the basic navigation now, in particular the hard buttons along the bottom.

The sync to Google may not have been especially helpful. It’s added lots of contacts with email-only who I never talk to. I suspect many of them I’ve never emailed, but may have received messages from via email discussion lists. Will require a cleanup. Looking at Gmail on my PC, it’s not immediately obvious where I can clean this up… though hopefully it’s there somewhere, as it’d take ages via the phone.

Ah, in the Contact list you can only display those with a phone number: People; options; View; Only with phone number. That makes things easier to deal with. (Found via the Google Mobile support forum.)

Need to figure out the alert sounds. Nokias have profiles which can be easily set so if you’re in a meeting you can switch it to silent. I’m not yet clear on how to do that.

I’m also not clear on how much battery the seemingly always-running apps are burning. This article suggests some ways of cutting battery use (for the Desire, not specifically the Desire S).

The battery ran out last night, which didn’t seem like outstanding life, but I suppose I’d been fiddling with it most of the day, and it was the first charge.

I recharged overnight and the battery life has been much better today.

I’m suspicious of the fact that icons hang around in the top-left area, occupying memory and perhaps taking battery life. Last night I tried the “Car panel” application, but bailed out when it asked me precisely what I wanted to do. A car icon showed up, and didn’t go away (even overnight after shutting down and restarting the phone) until I again went into the “Car Panel” properly and shut it down fully.

It’s a similar story with the Twitter and GMail applications. Of course I’m more likely to want them hanging around, but if I spend some time at my PC, I don’t really want my phone beeping when Tweets or emails arrive. It’d be nice to be able to shut apps off completely when not needed. Perhaps as I keep learning how to use the phone, I’ll work out how to deal with this.

At first I didn’t like the typing, but I’m getting used to it, and HTC’s version of predictive text works quite well… as long as I’m not trying to write a #RoadMorons Tweet quoting someone’s licence plate number.

The Android Market works quite well, at least for the two free apps I downloaded — Angry Birds (ad supported, about as fun to play as on Google Chrome), and Tram Hunter, an unofficial Android version of Tram Tracker, which works well.

Niggles aside, I’m enjoying the phone a lot.

Noticed last night that the weather app that runs as default splashes animated rain drops and a windscreen wiper over the screen when it’s raining. And when the sun was shining this morning, that was animated too. Cute. However this morning it was claiming that in Melbourne it was 4 degrees outside… in fact the Bureau of Meteorology reckoned it was 10.

Tried out charging via USB from a PC. Good; very handy.

The article that Terry linked to (in the comments) is very good at explaining how Android works with background apps, and has a nice reminder that This Ain’t Windows, and it doesn’t always matter if stuff continues running.

Paul2’s tip that you can drag the notification panel down to look more closely at it is handy, and something I don’t recall seeing in the instructions (though I haven’t read them in great detail). It also gives access to quick settings such as turning WAP on and off, which is handy for preserving battery life.

The old Nokia N95 in screen saver mode would still tell you the time (and a couple of monochrome icons for missed calls, new messages). The Desire S won’t tell you anything, except it flashes an LED if there’s something new that’s come in. As I mentioned above, this is not necessarily a good thing when GMail and Twitter are sending notifications of stuff I’ve already spotted from my PC, and I only really want to know about text messages and missed calls. And it’d be nice to be able to see the time without waking the phone up.

Uploading to Youtube was problematic over 3G, but worked okay from home over Wifi. The video quality seems okay.

Likewise, Flickr (using the builtin app, some HTC creation) was causing trouble over 3G, but fine over Wifi. Tony recommended I try Flickroid instead, which I will. The photo quality seems okay, and at the full size, there’s a reasonable amount of detail. OK, the battery life of this thing appears to (just) get me through 24 hours. The fact that it can be charged via USB is excellent, but I suppose standard these days.

Found my pics/video while browsing the phone’s file system in DCIM/100MEDIA, which wasn’t exactly intuitive, but wasn’t too hard to find.

Also found on the file system: a full PDF manual!

Most of the photos I’ve taken are lovely and clear. I still need to play around with the video to get a sense of the quality, but at first glance it seems not too bad.

The Twitter client has crashed a couple of times. Not really clear why.

I’ll probably get used to switching off wifi when I leave the house.

Likewise, getting used to how text messages are handled, in threads by sender.

All in all, still liking.