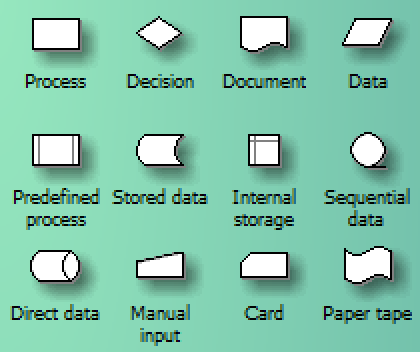 (I suppose these days “cards” could refer to some kind of portable storage, though I bet it really means punch cards.)

Love your iPod but hate iTunes? Try this iPod plugin for WinAmp. (Thanks David)

We got asked about problems with an old copy of Visio 4. Visio history and Visio support have some quite interesting information, but basically there’s no support going back to versions older than Visio 2000.

For quite a while I used Visio 2000 Enterprise Edition to design database schemas, and then have it create and update the tables. Admittedly the Visio 2000 interface is a little cumbersome for such things: it’s overzealous on its checking before you can update the database, and just try and delete a relationship without the sky falling on your head — it somehow thinks some kind of underlying link is still there, and if there’s anything wrong with it, it refuses to play ball. But when it behaves, it’s an excellent timesaver.

The other week I upgraded to Visio 2003 Professional Edition. Somewhere between 2000 and 2003 they’ve scrapped the Enterprise Edition, and although Microsoft don’t specify it in their literature comparing editions and versions, gone too is the database creation stuff. Apparently they’ve moved that functionality into Visual Studio Enterprise Architect — which Joel On Software describes as the super expensive “Enterprise Architect” edition at the top of the line that hardly anyone ever buys; it’s only there to make the other prices look reasonable by comparison. Great.

In Visio 2003 you can still draw database designs, or even generate them from existing databases, but there’s no way to create the DDL (SQL) for them, or update/create the databases themselves. I spent a couple of hours searching vainly through the Visio menus (the “Database” one is particularly deceptive) looking for such options, but couldn’t find them. I did find stuff pertaining to outputting a bunch of data describing my database diagram, but nothing would let me create the database I’d meticulously designed, or even print out a list of the fields and their types and sizes.

I have Visual Studio 2003, but for various reasons it’s the Professional Edition. So I couldn’t get my lovely design into the waiting and ready Oracle database. On the Visio 2003 Save As, it lets you choose “Visio 2002”. I wondered if by some fluke Visio 2000 would read a 2002 format. So I saved it, removed Visio 2003, installed Visio 2000 and tried to load it up.

Eureka, it worked. There was some further messing with it to get around a relationship on the database that was causing an error, and which I eventually decided I wanted to delete (an impossibility in Visio 2000 — see above) but eventually I got my DDL and indeed managed to create my glorious Oracle database.

But really, it shouldn’t be this hard.