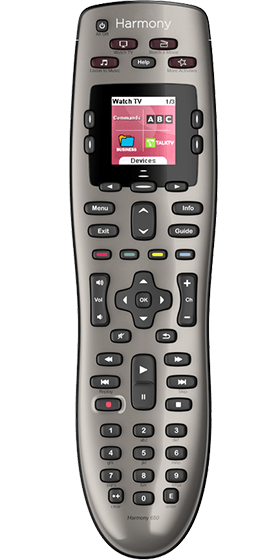 The packaging and some of the promotional material says it replaces 5 remotes, but it’s had a firmware upgrade and now replaces 8, so I think it’s pretty good value.

Although Logitech sells a range of remotes, I decided $59 was a sweet spot for what I wanted to do. This model can’t control Bluetooth devices such as the Wii U, or those controlled via WiFi/LAN such as Sonos — you’ll need to spend up on a more complex model for that, but personally I couldn’t justify the $240+ investment.

To set it up you plug it into a PC/Mac and install a setup program which guides you through it. All pretty easy, and even works with my obscure no-name PVR.

Curiously it didn’t recognise my Panasonic Blu-ray player, but it made an educated guess as to what IR sequences would match, and that worked well.

The defaults for some of the actions are a bit odd, for instance the menu navigation for Watch a Blu-ray turned out to default to navigating the TV menus. This can be overridden to a more logical setting.

One issue I’ve noted: the TV takes a really long time to start up… easily 10-15 seconds to be ready for viewing. It looks like the remote doesn’t allow enough time before changing to the appropriate input/channel, and the TV misses this step. You can insert delays in some parts of Activity sequences, but it appears not here.