Like many people, I don’t just use my phone for making phone calls. It’s a calendar, address book, alarm clock…

In recently upgrading from my old reliable Nokia 6100 to a Nokia 6230i, I’ve added camera, radio and MP3 player to that.

(The 6100 still works fine. It’ll go into storage for when my kids start needing/wanting a mobile.)

Why the 6230i? In my position as tech luddite, I judged it to be a good balance of price (free, that is totally subisidied, on a $30 Telstra business plan, which has very decent call rates, in fact well below what I was previously paying) and features. I wasn’t willing to pay the premium for something super-fancy like the Nokia N-Series, which would have given me 3G. Video phone calls might be fun, but are pretty useless to me. Not worth the extra dosh.

It’s also (unlike some of the camera phones) not much bigger than the 6100, which is pretty titchy. If I’m going to carry a phone with me practically everywhere, it’d better be small. Err, but with a keyboard big enough for my manly adult fingers, and a screen big enough to be productive. Ah, conflicting requirements, but not insurmountable.

I should emphasise that I wasn’t looking for a phone to read emails on, or browse the web with. The 6230i will do both of these, but not well. How much can you fit onto a tiny screen? Not much. If you want to do that, I’d be looking at a proper PDA.

And yes, I wanted another Nokia phone. I know how they work. They’re easy to use, and I’d prefer not to wrestle with an unfamiliar OS. And those I’ve had have been fairly reliable.

It’s worth noting however that the first 6230i I got was faulty. Not in a major way, but the “1” key needed to be pressed quite hard to work. I took it back to the shop for another one.

Once I got a working one, I found the buttons are reasonably responsive. I had pondered about joystick-type things after looking at my sister’s mobile (a Nokia 6021 with its awkward plastic joystick), I hoped this wouldn’t be the same. It’s not, it’s bigger, more like a console game controller, with the button in the middle.

The call quality seems good, though at first it sounded slightly tinny compared to my trusty old Nokia 6100. It didn’t seem to take long to get used to it though, and adjusting the volume to suit me better helped.

It came with a Pop Port stereo headset (doubling as a radio antenna), but I’m thinking I’ll invest in one of those cool Rise Of The Cybermen-style Bluetooth headsets, so I don’t have to fiddle with it to get the benefit of an earpiece during a phone call. (Is it just me that holds the phone so close to my head that after a few minutes, it leaves sweat on the phone?) The Pop Port actually means my old headset works too, by the way.

The interface is very responsive. This might be a reflection of the 6230i’s past as the 6230… and again fits into my tech luddite mould. It’s mature technology, unlike say my girlfriend’s Nokia 6670, which I’m guessing was cutting edge on release, as the interface is a bit slow on that, not helped by having to press the main button twice to select a menu item — as if you could move around in Windows Explorer only by right-clicking on things. On the 6230i you can zoom through the menus, without the phone pausing to think about things and slow you down.

All the functionality I’ve been using on the 6100, with the only exception I note missing being Caller Groups. I liked that on the 6100, as when the phone rung, if the number was in there, it gave me instant feedback on whether it was friends/family, someone at work, someone from the media or otherwise related to my advocacy work, etc. On the up side, you can attach pictures to contacts.

Camera: It’s 1.3 megapixels for still photos, which is not super-brilliant, especially compared to a dedicated camera, but okay for a phone. The quality is quite good as long as the light is sufficient. If there’s a lot of shadow, it’s slightly murky (at least on the phone screen, important if you’re sending the picture as an MMS), though that might improve by using the night mode. As you’d expect, the pictures look terrific on a computer screen. The resolution is high enough that you can crop a bit for blog usage, for instance.

Example picture: This has been shrunk down from the original 1280×1024, to about 1/3 the size. Click on it to see the original, which shows the kind of grain you’ll see on a cloudy day. 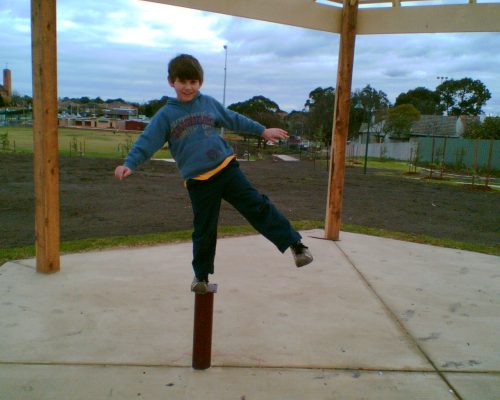 The video is a bit grainy, but hey, it’s a cheap phone, not a camera.

Radio and MP3 player seem quite good. Enough to drown out noisy teenagers on the train, anyway. The radio only works if you plug in the headphones (confusingly described as an “enhancement”) as they work as the antenna. There’s two free Tears For Fears tracks on the memory card. Yeah. Triffic.

The Nokia suite isn’t that exciting, but it does seem to work okay over the old iRDA link I’ve got, if a little slowly for pictures/video. You can also browse around in Windows Explorer if you prefer syncing pictures the manual way, which is good, since you probably don’t want all the Nokia default test pictures being copied needlessly to your PC.

Copying everything off the ol’ 6100 was easy enough, using the backup software. Sync works as you’d expect, happily feeding Outlook (and vice-versa). Mind you I get it to sync to a separate contacts folder from my main Outlook one, to stop my phone getting clogged up with people for whom I only have an email address, no phone number. That said, it does seem to have picked up a bunch of ancient contacts that may have been hidden away in Outlook somewhere, so I will need to do a bit of cleaning up.

I’m planning on buying another cover, in part to distinguish the phone from a colleague’s identical one, but also as a spare in case damage is done to it, a strategy that worked well over the two years life of the 6100. For a few bits of plastic, the Nokia covers are pretty expensive at about A$35, though what I assume are clones can be bought on eBay for about A$10 including postage. It’s tempting to go down that route.

All in all, I’m very happy with the 6230i. Now fairly cheap, and plenty of features. Recommended.