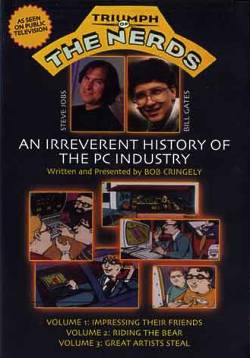 To give my kids an education in the ways of the tech world, I dug out my old VHS copy of Robert X Cringely’s documentary masterpiece from 1996, Triumph of the Nerds. Almost to my surprise, they enjoyed it. And why not, it’s a ripping tale, well told. I don’t always agree with Cringley’s pulpit columns, but he does make good TV.

I wouldn’t mind getting hold of this on DVD. But of course, three things stand in my way:

It’s worth noting that Cringely went on to do Nerds 2.0.1, about the rise of the Internet. I don’t recall that airing in Australia. Where can I buy that one? Not even from PBS, who appear to be out of stock.

What a shame I can’t buy this stuff and dutifully pay the copyright holder with my cold hard cash.

PS. Wednesday 8am Found Nerds 2.0.1 on another (rather fuzzy) tape, so it obviously did air in AU.

3 thoughts on “Triumph of the Nerds”