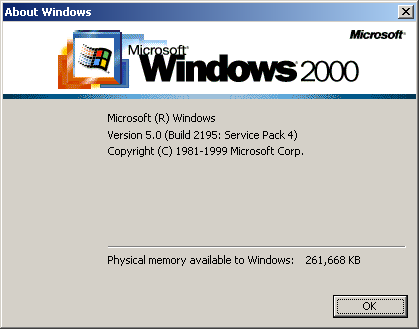 Tony just upgraded one of the PCs in his house to Windows 2000, from Win98.

Certainly. I’m a bit of a Windows luddite, and I am firmly opposed to trying to overburden old machines with OSs beyond their grasp. I’m betting the PC in question is a few years old. XP may be a wonderful thing, but it doesn’t run well on machines slower than about 1GHz, even though MS claims 300Mhz is okay.

Hell, I have a shiny new 2 point something GHz machine at work, and some functions in XP still run slowly. That’s why my (to be replaced sometime soon, probably as soon as I need to start looking seriously at .Net) 650Mhz machine at home remains on Win2K.

Old machines live on… and on… and on. And if they’re being used by people who only want them for email, web, word processing and so on, there’s no compelling reason to throw them away, no matter how much MS and Intel and Dell might wish you’d keep upgrading. As long as they’re patched up to the eyeballs, virus and firewall protected, they run okay.

For machines from about 233Mhz to 1GHz, Windows 2000 is probably the best. It’s still actively supported by Microsoft (say a thank-you to all those corporates still using it), and MS haven’t gone to the lengths of making the latest Office versions incompatible with it to make people upgrade. (Yeah, sure, convince me there was a technical reason Office 2003 couldn’t run on NT4). While it misses out on the bells and whistles of XP, for a lot of users, it’s all they need.

Slower than that, you’re probably aiming for Windows 98 SE. It may be ancient, but it’s the most stable of all the 16-32-transition Windows versions, and runs well even on a lot of machines going back 8, 9, 10 years. Patch it up with the unofficial SP, then dig out that ancient copy of Office 97 SP2 (which, frankly, does everything for Office that most people want) and non-power-users will be perfectly happy.

Okay, apart from Outlook 97. Give that a miss. 98 was okay if you can find it, but 97 was fawful. Better to give them Outlook Express. And of course you’d need to fiddle the IE security settings from their “wide open barn door” defaults.

Linux? Well, it may suit some people, but most will want a high level of Office compatability, and it just doesn’t seem to quite cut it for that yet.