Not that I have much to add to the sum total of published knowledge on this, but our situation is we have a COM object (legacy code) calling .Net 2 objects (not-quite-as-old legacy code).

We’re upgrading it all to .Net 4.5, but the .Net stuff is an easier change, so we’ve been doing that first, naturally in a carefully planned, staged manner.

It turns out that COM+ objects have a 1 Gb memory limit.

And it appears that when you have them calling a mix of .Net 2 and .Net 4 objects, the overhead of being able to call two different .Net Framework versions becomes an issue.

At least that’s our theory based on what we’re seeing — looking at ProcessExplorer showed about a dozen assemblies loaded for each version of .Net.

One blog post I read suggested a 600-800 Mb overhead for each .Net version. I can’t confirm that, but certainly we’ve had more Out Of Memory exceptions than we expected.

We’ve resolved it by going back to our .Net 2 code (so only one version is held within the COM+ process at once), and we’ll do the big switch all at once. Hopefully that’ll resolve it.

The COM object will also be switched too of course, and once that’s done, running everything in .Net 4, plus a move from 32-bit to 64-bit machines, apparently will lift that 1 Gb limit to 8 Tb!

This is a cool introduction to ASP.NET MVC, but I think it’s pretty funny that the “5 minute introduction” goes for 8 minutes.

They do make you jump through some hoops, but I think I’ve got it worked out.

…then you either set it to be a date (using DateSerial or CDate or whatever, or you set it to Nothing.

Then when you’re using it in a database query, the parameter can be set like this:

That’s it. At least, it seems to work okay for me. Touch wood. Apparently it should be okay in the .Net Framework 2 onwards.

[Another in an occasional series of things Daniel posts about so he can easily re-discover it next time he needs to remember how it’s done.]

I’ve done this before, it should work: I’m running .NET on this box. I was installing .NET onto our build box here, and I kept banging my head up against step 1:

But it was not right. What I instead needed to do was grab the DVD that has all this stuff on it: it’s version includes the prerequisites right in the VS2003 install directory. Silly me. I should have known there were many versions of VS.NET. Some of them will install.

My .NET web service – which wraps some legacy COM objects – wasn’t working. Development under VS2003 using .NET 1.1 worked fine in my dev environment, but in test env it just kept whinging:

That’s a pretty basic failure – it couldn’t even obtain a xxx.yyy interface from the COM object. I figured it was a IIS security problem: a .NET desktop app using the same set of COM libraries worked fine.

The thing was, when I set the user account to operate annoymous web users under to local Administrator, it still didn’t help. Perhaps, I thought, this isn’t a permissions problem. Web users are now, after all, Gods.

Perhaps, Glen suggested, I was running .NET 2.0 and .NET 1.1 simultaneously?

It turns out missing part was the

Why does the Web Setup Project fail to include important little files, like my .asmx and web.config files? What is the point in having a wizard that just makes a installer that doesn’t install a working system? And the dependancies tree! God, just let me specify – or figure it out for yourself – the order in which to register the COM objects.

But guess what? All of that is unnecessary, if only your Installer derieved MyEventLogInstaller is set up thusly:

– with the RunInstallerAttribute being the super important part. Or perhaps it should read RunInstaller. But don’t worry, neither of them actually cause the installer to run them. As such, all you need do is issue the command

after the installation program is done and you’ll be cooking with gas.

Simple, huh? No need for that nasty web.config file after all! Especially with it impersonating a dud security context.

Oh! And remember to issue a regsvr32 comcomponent.dll command also!

A dead giveaway that you haven’t run installutil is if you get an exception like this:

because installutil will create an entry for Event Logging, if you’ve developed the appropriate installer. And because the person running installutil has decent privileges, it will actually work, as opposed to your web service trying to do it when it’s running in a securely locked down account.

I’ve made a C# Web Service. Now I need a deployment project for my Web Service. After installing, it turns out that my Web Service needs to set the security on a registry key to allow the ASPNET user Full Control. Fine. I’ll need some sort of hand-written code to do that, because security is something the installer doesn’t cover. Stumbling around the help and web, I find I need to View | Editor | Custom Actions to create a Custom Action (right-click On the Install event/action, select Primary Output from JoshsPrimaryOutput; on the properties of this new Custom Action set InstallerClass to false and set EntryPoint to JoshsEntryPointFunction). Build.

I get the error:

…specify a valid entry point within the DLL.

Fine, makes sense. I’m not stoopid, I’ve been a C++/Windows programmer for a very long time. I know DLLs, I know entry points, this holds no fear for me. C# has DLLimport. It seems to be missing DLLexport. I’ve just spent several hours searching online help and the web for an answer, so now I turn to you, our esteemed readers.

How do I specify a module entry point in C#?

(Wow, I never thought I’d be referring to VB6 code as legacy, but there you go. None of your smart comments, any VB-haters out there.)

Here’s what I’ve discovered about making it work. END_OF_DOCUMENT_TOKEN_TO_BE_REPLACED

Pretend to be a Java developer by watching three webcasts, and get a free copy of Visual Studio.Net (US and Canada only). (via Jekke).

I did find the new VS gives out a few very informative warnings in the code editor, such as unused variables. Good stuff (and shame on me for being so sloppy during repeated revisions of code).

The other thing I found was a few things had changed in the Web.Config file format. After much fiddling I found it easier to create a fresh one and copy my custom settings into it, than try and convert the old one over.

The only catch is that after copying it all over to the test server, it didn’t work. Turns out apart from installing the .Net 2.X Framework on your server, you’ll also need to get into the IIS setup and make sure it knows it’s now a 2.X application. 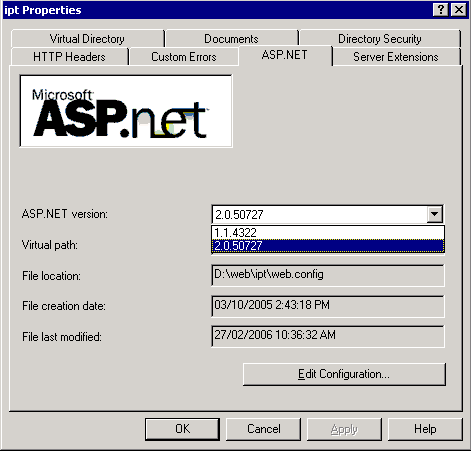 Other than that, pretty smooth. The one gotcha on my actual code was a custom button click routine that took the form QueryString and stripped out all the ASP.Net guff I didn’t want needed a bit of tweaking, as in .Net 2.0 there’s an extra __EVENTVALIDATION value. (My version is adapted from a 15seconds.com article, and is used to produce tidy QueryStrings that can be bookmarked.)

If these are the new language features in C# 3.0, I weep for the right to innovate.

I was running a .NET app, and all it did was say:

After I hit Ok, the app crashed with an exception. I didn’t write it. Others could run it, I couldn’t. What was I doing wrong?

I was running the exe from a network share. Copying the exe to local fixed the problem.

From the forthcoming book The Search: How Google and Its Rivals Rewrote the Rules of Business and Transformed Our Culture, here’s an article about how Google got started.

How to deploy Visual Studio .Net applications to Linux. (via Brad)

Now maybe I can sell off my old BBC B, once I get a Beeb emulator working. Shame I might never recover my old Ultima clone that some friends and I were working on in 1988.