Teletext was developed in the 1970s in Britain as a way of sending information (text and basic colour graphics) in a PAL television signal.

The BBC implemented it as Ceefax (1974 to 2012), and numerous other broadcasters in PAL countries also used it. In Australia it was called Austext (1982 to 2009) and broadcast on Channel 7.

Apart from screens of information, the technology was also used to provide captions for TV programs (in Australia on page 801 on all networks).

In Australia, it ended in part because the original equipment was at end-of-life, no doubt combined with the rise of the Internet for getting that sort of information.

THE AUSTEXT SERVICE WILL CLOSE ON 30 SEPTEMBER 2009.

The Seven Network started providing test Teletext services in 1977, with live services commencing in 1982 in Brisbane and Sydney.

The Austext service today is still provided using the original 1970’s technology. This equipment has now reached the end of its lifespan.

Unfortunately,it is not possible to replace the existing Austext system with new equipment except at significant cost.

The BBC Micro and teletext

When the BBC Micro was introduced in 1981, this included a graphics mode (Mode 7) that natively supported teletext graphics. Given the computer only originally had 16-32 Kb of RAM, this mode using only 1 Kb was handy to have. It was mostly used by text-based programs, though there was the odd action game implemented in it — I remember a rendition of Space Invaders that used Mode 7.

In schools, BBC Micros could be networked together using the Econet system. A Teletext-like system was available that I think was called Eco-fax — we had that at my high school.

Less common, and only used in Britain, was a special Teletext adaptor, this could be used to download computer programs.

Teletext on broadcast television might be long gone, but there’s one place the technology is still used: in Australian racing. 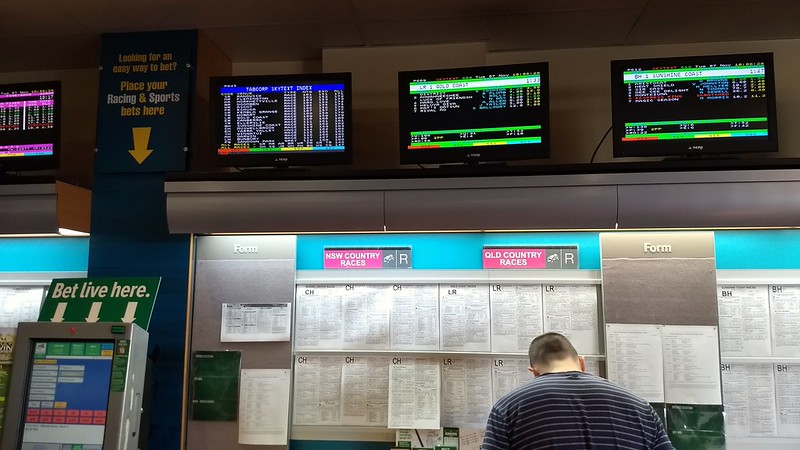 Walk into any betting shop (this photo is from a TAB in Melbourne) and you’ll find these familiar text displays, with 8 colours, the capability of flashing and double-height text, and simple graphics, under the brand name “TabCorp Skytext”.

I have no idea how the signal is broadcast, but it’s definitely the same display technology. Nice to know it lives on, over 45 years since it was devised.