A followup on the Pinnacle 310i tuner I got last year. 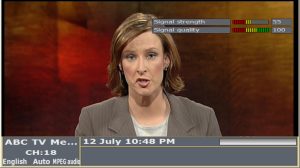 It gets some brilliant results when capturing, especially from digital TV transmissions. Playing back a recording on the MG35 media player is a joy to behold (and that’s off the SD signal… the HD signal, from a true HD programme, is incredibly nice when playing back on the PC, though it appears the MG35 can’t handle that high a data rate very well).

But the software it came with is a steaming pile of crap. When I installed it I noted with caution its use of SQL Server Express Edition and its probable load on the PC, and the clunky interface, but didn’t really mention the response times. It’s slow. Really slow. To start up the app takes what seems like an age (and is probably about a minute). To change the channel or start/stop recording also takes ages. It makes it a poor substitute for a twenty year-old VCR you might have lying around — at least if you see something appear you can get that recording quickly.

Pinnacle have apparently seen the light on this, and launched what they claim is a lightweight “TV Center Pro” with a lot of the fat taken out.

Having zapped the MediaCenter from the box and installed the latest drivers, I can see a clear difference. It’s not superfast, but it’s an improvement. I’m still having issues with capture from analogue though. Okay so I can defrag my drive, but that’s only going to help to a certain extent. And annoyingly, capture inside Pinnacle Studio or MS Movie Maker doesn’t suffer from the same sorts of problems. There’s just something in the overhead of the TV viewer software that slows it all down.

I did try the open-source Media Portal, but couldn’t get it to work. Kept crashing. Windows Media Capture is also worth looking at for just capturing (as an alternative to doing it from within the video editing software).

ArsTechnica has an interesting article that should provide some tips; they use VirtualDub VCR+Sync.