I’ve almost got my MG-35 media player box thingy working. (More to come on this). One of the hurdles was finding somewhere to plug everything in.

Perhaps my TV (a Loewe Profil Plus 9472) is not the best-endowed in the world, but it only has two Scart connectors (which I can obviously use with adaptors to accept Composite/RCA) and an antenna input. It also has audio output, so I can feed back to an amp. Oh, and composite/RCA at the front for camcorders and/or messy people.

But two isn’t quite enough when you’re dealing with:

On the audio-only side, I’ve got the CD Player and the iPod (dock). Thankfully no turntable or cassette deck. The amplifier I’m trying to feed these into doesn’t do too badly, with inputs for two VCRs, CD player, tape, turntable. (Actually it’s a Receiver, since it also has a tuner, but I usually think of it as an amp).

So, how could I get this all working without going out and buying a new switchbox or anything? Well I ended up sitting down with a piece of paper and mapping it all out. I tried to resist firing up Visio to work it all out. 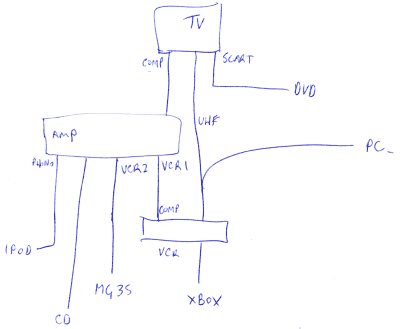 The priority here was to get absolutely everything plugged-in so that switching between them would involve pressing buttons, not plugging/unplugging. And no cables hanging out the front of the various devices. As tidy as possible.

And miraculously I managed it. After a bunch of re-arranging and rummaging behind things, it’s all plugged in. The only thing that didn’t work was the iPod going into the Phono socket. I forgot those sockets use some different standard thingy so you get distortion. It’s going into the Tape Monitor inputs instead.

Yes it’s true that sound/video quality will obviously degrade slightly each time it gets switched through something, but at present this is not a huge priority. It all looks okay, though if I decide later that the XBox picture looks too fuzzy, I can re-route it direct into the TV (if I have the energy).

I might also get some new hifi furniture. That old Ikea setup isn’t very pretty.

And next time I buy a TV? It’ll be one with plenty of inputs.

6 thoughts on “Re-arranging my AV cables”