Well I’ve finally done it, transferred my old Ultima BBC clone game “Quest” onto the PC, so it’s now playable in a BBC Micro emulator such as BeebEm.

First thing to do was get the two beasts talking to each other. Unlike many 8-bit computers, the Beeb was blessed with a relatively standard serial port, the RS423 which is basically a cut-down version of the RS232 serial port we’ve all grown to know and love on modern PCs. Fortunately I had an old RS423 (DIN-5) to 25 pin modem cable I could use. I got hold of an old null modem, and the right combination of 25 pin to 9 pin adapters and gender changers to plug it into the PC, and Bob’s your uncle.

Except it wasn’t quite that simple. The software I tried out, XFer (later version here), which would transfer whole disks from the Beeb across the wire, wouldn’t work. Turns out it doesn’t like the standard cables, but wants something special.

I’m not much of a hardware-type person, so I elected to find other software that would do the job. I ended up with an ancient BBC Kermit ROM (actually a sideways ROM image, if you know what that is; if not I’m not going to explain it right now) that I had, talking to Windows 2000 Hyperterminal on the PC.

They would talk at a max baud rate of 9600, which is pretty damn slow, but hey, we’re talking disks of a max 200Kb a side here.

Oh, if you try this, be very careful to SET FILE TYPE BINARY in Beeb Kermit.

There was, however, a problem in that after a period of time, the old BBC disk drive started smelling funny, and smoke started coming out. Seriously.

I had to shut it down for a while to calm it down, and from that point on I was doing things bit by bit, and letting it rest in between.

Once the files were across, I needed to run an *INFO on the Beeb to get a look at their attributes. BBC files have a load and execute address that’s important to let the Beeb know what to do with the file when it’s loaded. A BASIC file, for instance, is normally loaded at &FF1900 and has an exec address of &FF8023. Without these, the files don’t work very well.

The way the Beeb emulators work with this is to look for an INF file for each file, which contains the load and execute addresses. Once I’d figured this out, I could read them into a BBC disk image creator (there’s two that I found: BBC Explorer, and DFS Explorer — the latter under active development, with the author helpfully answering my questions).

Battling dodgy 15-year-old disks, I gradually got all the files I needed for the game across. I did find the latest version wouldn’t run properly, but a slightly older one did run okay… even if it brought back memories of bugs that I’d obviously intended on fixing when I last looked at the code, back in May 1990.

For those with the energy to try it, the game (in all its bugridden glory) will be made available by the BBC games archive site Stairway To Hell shortly. 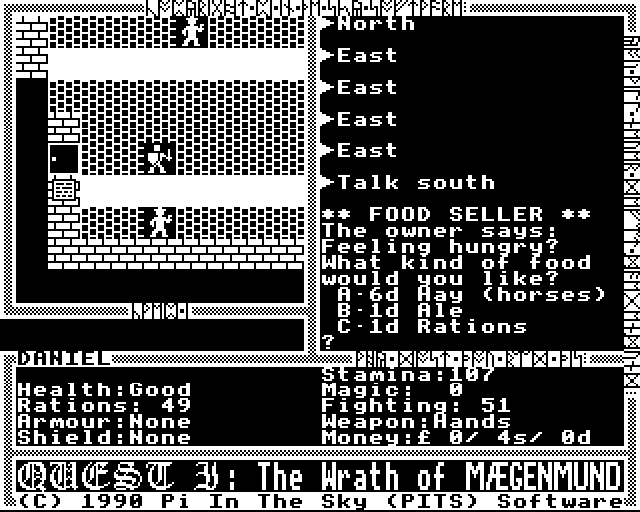 2 thoughts on “Moving files from BBC Micro to PC”