When I was 17 or so (year 11, 1987), I had spurned my Commodore 64 in favour of a BBC B micro. At the end of year 11, some of the departing year 12s gave me the code to a little project they’d been working on: a clone of Ultima for the Beeb. It was really just the core of such a game: the display routine for moving about the map, obscuring objects out of view (such as behind walls), and showing monsters.

At a time when I should have been out pursuing girls, this caught my imagination (I’d played a LOT of Ultima in my time), so I took the code and expanded it. A friend who was into role playing games wrote a basic story for it. Another friend supplied some music for the title screen.

I re-wrote the main display routine in 6502 assembly language for speed, and added maps, extra characters to talk to, weapons and fighting. “Quest I: The Wrath of Mægenmund” (egads, it sounds like something out of Spinal Tap) wasn’t anything special, and was never finished, but it was pretty cool. 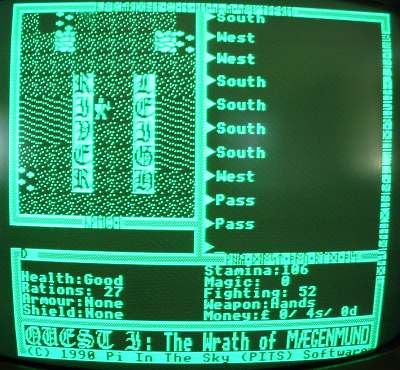 It ran in the Beeb’s graphics mode 4, so it was monochrome, 320×256 pixels, I think. It used a lot of loading in and out from the disk, with a main (outdoor) map, and lots of separate maps for dungeons, towns and villages. There was no sound to speak of, but there was a lot to explore. You could buy drinks from bartenders (to gain strength), talk to the villagers, buy weapons and supplies, then go out and fight monsters to get more treasure. The money was measured in pounds, shillings and pence, and the language and fonts of the characters and the interface was a wacky mix of olde English, gothic script and runes. 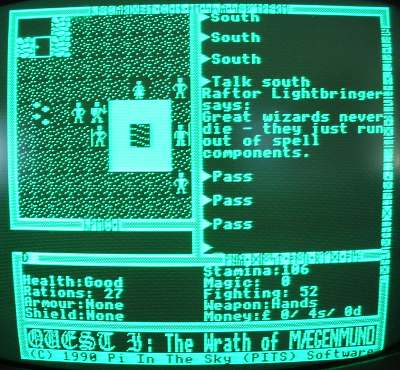 I kept working on it for a couple of years after high school (the Beeb saw me through part of university, until an IBM PC arrived in our house), but it fizzled out in 1990, when other interests overtook it.

4 thoughts on “Quest I: my Ultima clone on the BBC micro”