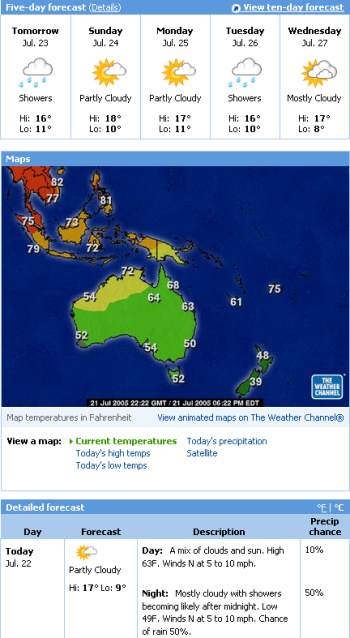 Scoble pointed to weather.msn.com. He reckons the only problem with it is lack of RSS.

There’s a bigger problem. It’s Fahrenheit-centric. You know Fahrenheit, that antiquated temperature system used exclusively in the USA, that the rest of the world has abandoned?

Okay, so you can get some stuff in Celsius. The current conditions and brief forecast — that’s all good. Okay so it defaults into F, even for non-US cities, but you can change it to C very easily. It even automatically gives me time local to that city — very nice.

But scroll down a little way, and you’ll find a map, with Fahrenheit all over it. Yeah, they mention it’s only in Fahrenheit, okay, and that seems to be how they got it from the Weather Channel.

So while MSN are hassling the Weather Channel for maps in C or F depending on user preference, maybe they can ask them what the hell happened with the map of Australia and friends? It’s got Hobart, Sydney, Darwin, Perth, Adelaide. Wait a sec, no Melbourne (Australia’s second-biggest city), no Brisbane (Australia’s third-biggest city), no Canberra (Australia’s capital city). They’ve highlighted what might be Cairns, Broome, perhaps Mackay and … oh, somewhere near the Gulf of Carpentaria; perhaps Mt Isa.

Worse, the detailed forecast has half C and half F, and wind speeds in mph. That is not very helpful. To most of us, it might as well be in Swahili.

I might also point out that in the smallprint of the Melbourne current conditions, it mentions the observations are from the Coldstream AWS. That explains why there are currently 37kmh winds outside. Coldstream is not actually in Melbourne, but beyond the urban fringe. Of all the Melbourne AWS locations, it’s probably the worst to try and measure Melbourne’s weather conditions. The one in the city centre probably would have been the best.

I can only hope MSN weather is at least accurate and useful for US users, because it would appear to be next to useless for anybody elsewhere.