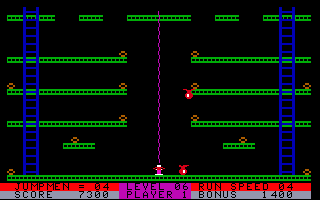 Why has nobody made the perfect Jumpman remake?

Caveat: it has to run on my secondary 1.7 GHz Windows 2000 PC, which though it has a 3D graphics card, the 3D doesn’t work because of some weird-arse issue with DirectX (Short version: It’s a Diamond Viper V550. I’m sure DX 7 and 8 worked okay with it, but DX 9 doesn’t… and it’s pretty much impossible to downgrade without re-installing Windows.)

Given this computer is over a thousand times as fast as a Commodore 64, that shouldn’t be too hard.

Okay, so maybe it’s time to look at a C64 emulator instead.

3 thoughts on “Looking for the perfect Jumpman”