The Google blog has detailed a number of Google products being discontinued. Most of them I’ve never heard of (Aardvark?) or considered of doubtful use (Google Pack).

But the really disappointing cheap cialis online one for me is the end of Google Desktop.

In the last few years, there’s been a huge shift from local to cloud-based storage and computing, as well as the integration of search and gadget functionality into most modern operating systems. People now have instant access to their data, whether online or offline. As this was the goal of Google Desktop, the product will be discontinued on September 14, including all the associated APIs, services, plugins, gadgets and support.

I really like the way Google Desktop can simultaneously search my local documents, emails in Thunderbird, and in GMail as well. I suppose I’d better learn more about Windows 7 Search — does it even offer the same capabilities?

Windows-powered public big screens gone wrong just don’t get old, do they? Unlike most, this hadn’t crashed — it was waiting for logon. Presumably it had been rebooted and nobody’s figured out how to make it logon automatically.

Sounds similar to these kinds of fake Windows anti-virus scans which you see around the place, and try to convince you to click and download an executable which will supposedly clean up your PC: This type of thing reinforces the fact that no browser/platform is safe from malware, and that it’s important not to regularly run your account with Admin privileges on your PC.

Personally I reckon it wouldn’t hurt to have a setting in Windows (and other operating systems) that prevents running executables from any directory where the current (non-Admin user) has write-permissions, eg only letting them run programs that have been installed by an Administrator.

Does any OS offer something like that at the moment?

This is utterly awesome. This guy (with a good dose of humour) has started with MS DOS 5, and Windows 1, and followed the upgrade path all the way through to Windows 7.

Having started Windows and logged onto a clean desktop:

No wonder people are heading into the cloud.

Subsequent timings (without a reboot, so some things may be cached, eg later in a session when you’ve closed your email and you want to go back in):

(Apologies for the long title. I’m hoping Google indexes this well so some poor sod who gets this problem will easily find it the solution.)

Many problems the other day trying to connect a shared drive on a server (Windows 2008) on a domain, but with a local user.

It would work from some hosts, but not others — returning enigmatic errors hinting that the username/password combo was wrong.

The weird thing was, using a domain logon would work every time.

We thought it might be dependant on whether the hosts were in the same domain, but it looks like it’s related to the version of Windows being used… with later versions able to connect okay.

I did wonder at the time if it might be due to a weird security policy setting, and that turned out to be right. It seems later versions of Windows Server have stricter security settings.

After much wailing and gnashing of teeth, then some Googling, I eventually found the solution here:

This MSKB article has some material on it: Q823659 — it’s helpfully buried with lots of other security policy settings. Look about two-thirds of the way down for “Network security: Lan Manager authentication level”.

If the policy is set to (5) Send NTLMv2 response only\refuse LM & NTLM on the target computer that you want to connect to, you must either lower the setting on that computer or set the security to the same setting that is on the source computer that you are connecting from.

Yes, I suppose I could work out how to change the client host to use NTLM V2. But I really don’t want to break anything else.

Oh, and the KB article almost gleefully notes something we saw when wrestling with this:

One effect of incompatible settings is that if the server requires NTLMv2 (value 5), but the client is configured to use LM and NTLMv1 only (value 0), the user who tries authentication experiences a logon failure that has a bad password and that increments the bad password count. If account lock-out is configured, the user may eventually be locked out.

Interesting — Microsoft has launched its WebMatrix open-source web development bundle, as well as the first version of its open-source “Orchard” content management system.

Wonder if these means MS has WordPress, Joomla and Drupal as its targets? Perhaps it’s realised that having some kind of open-source CMS is vital to winning the hearts and minds of web programmers, and weaning them off PHP and MySQL back to ASP.Net and SQL Server.

I was using a USB drive to move copy files from a Windows box onto a Mac.

Easy enough; plug it in, copy the files over.

Then I plugged the drive back into a Windows computer. What do I see? Oh, delightful, MacOS added some hidden directories for Trash and Spotlight. 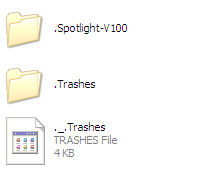 Harumph. Annoying, but no biggy I guess.

Wait a sec, what’s inside those directories? A bunch of stuff, it turns out: Now, I could understand that if I’d copied anything from the Mac back onto the USB drive, thus it might have needed all that stuff to do the wonderful Spotlighty things in the future.

But just copying stuff off it? Why make that assumption and dump all this crap on it? Particularly hidden, so many people wouldn’t even spot it.

Oh well, it’s in keeping with the iTunes bloatware philosophy of dumping heaps of software onto your PC that most people don’t need. Ed Bott’s updated his guide to avoiding that with iTunes 10:

Apple still gives its customers a monolithic iTunes setup program with absolutely no options to pick and choose based on your specific needs.

Why is that important? When you run the iTunes setup program, it unpacks six Windows Installer packages and a master setup program, which then installs nearly 300MB of program and support files, a kernel-mode CD/DVD-burning driver, multiple system services, and a bunch of browser plugins. It configures two “helper” programs to start automatically every time you start your PC, giving you no easy way to disable them. It installs a network service that many iTunes users don’t need and that has been associated with security and reliability issues.

And you wonder why I dislike iTunes with a passion that burns like the fire of a thousand suns?

It’s a must-read if you’re installing iTunes on Windows.

Installed using the less-bloat method (for people like me who just want to use it to manage an iPod):

Extract the components from the iTunes setup EXE…

All good! All up to date!

I decided to fire up Quicktime and make sure none of its stupid tray icons were configured to run all the time, wasting my memory and CPU. What do I find? 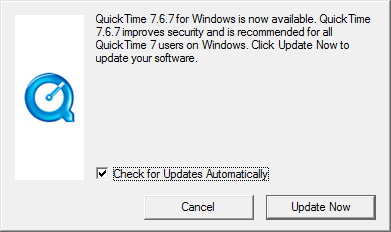 Oh, bravo Apple — can’t even keep their own software up to date.

I posted this on my personal blog because I thought it would be of general interest:

Zero-day flaw. EVERYBODY PANIC! (Well, if you use Windows.)

Simply browsing a USB drive, Windows file share or WebDav directory can potentially infect you via a rootkit inside a .lnk file. All current versions of Windows said to be vulnerable.

Ebooks To Understand Fibromyalgia And Other Diseases com/technet/security/advisory/2286198.mspx”>Microsoft advisory: Vulnerability in Windows Shell Could Allow Remote Code Execution — no fix yet, but they do list a workaround.

Today, a colleague suggested the best mitigation I have heard so far: deploying a GPO disallowing the use of executable files that are not on the C: drive. This will work for most environments, and you really shouldn’t be running executables from USB drives and network shares anyway. We tested this solution against the vulnerability and it does in fact provide protection.

…which would be nice, but I’m buggered if I can find it in gpedit.msc.

From the looks of it, most of the big anti-virus vendors are onto it, and will detect it as long as your definition files are up to date.

Ebooks To Understand Fibromyalgia And Other Diseases